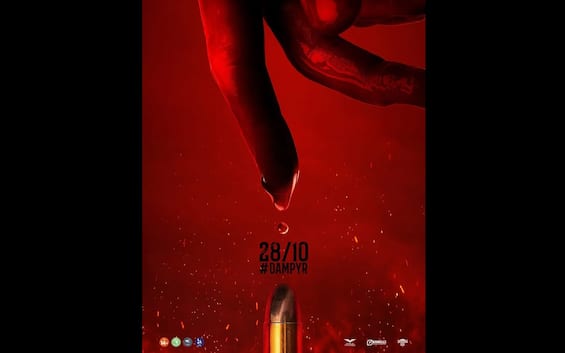 A long wait, a production slowed down by the pandemic, but now one of the most anticipated films by Italian comics fans is ready to arrive. Dampyr, cinecomic inspired by the homonymous comic book character from Sergio Bonelli Editore, will be released in cinemas on October 28th. This was announced by the publishing house itself through its social channels.

The news was then relaunched by Mauro Uzzeo, screenwriter of the film together with Alberto Ostini and Giovanni Masi. The subject is based on a story by Mauro Boselli and the direction is entrusted to Riccardo Chemello. The film was announced in 2019 at Lucca Comics & Games, a few months before the arrival of Covid.

According to the ancient beliefs of Slavic folklore, the dampyr is the child born of the union between a woman and a vampire. Half human and half alien creature, he is the only creature that can kill the Archvampires or Masters of the Night, their court of undead and the other creatures of darkness that haunt our and other worlds. Harlan Draka is a dampyr. But at first he doesn’t know he is. He knows he was born during the last world war and that, for reasons unknown to medical science, his body ages very slowly: Harlan looks twenty-five at the most. He knows his mother died giving birth to him and believes his father was an enemy soldier. In the course of a merciless war, when Kurjak’s troopers force him to battle a ferocious supernatural adversary, Harlan Draka discovers that he is truly a dampyr, endowed with extraordinary powers. He therefore discovers that his father was a supernatural creature, of the lineage of the Masters of the Night. Though haunted by strange nightmares and his mysterious origins, Harlan is a tough guy. Tough, disenchanted, sometimes cynical and sarcastic, he is basically an idealist and a romantic and has sworn to dedicate his life to the fight against the race of darkness and Evil that dominates the world. And in the course of his mission he often confronts, in a love-hate relationship, with his father Draka.

Tesla is an undead, but don’t remind her too much, she might take it badly. We assure you that getting her fangs under her is much less pleasant than you might think looking at her. Before meeting Harlan, she was part of the undead pack dominated by Gorka, the first of the Masters of the Night faced and defeated by Harlan Draka. Now, freed from the bondage of her creator, she has agreed to share her path with Harlan and Kurjak. Among the vampires she is now known as the Renegade. Tall, young, beautiful and gritty, physically inspired by tough, independent women like Annie Lennox, Tesla was not included in this series to inspire itchy instincts or to play the classic part of the “blonde in distress” or the “eternal sweetheart of the ‘hero’, but to fight and destroy the wicked of every kind and nature. At times, traces of human feelings peep out under her apparent cynical and hard skin, such as friendship, altruism and perhaps even love. She falls in love with Harlan, but due to Dampyr’s nature, there can be no physical relationship between them. With the other co-protagonist, Kurjak, she establishes a funny constant bickering, but deep down, deep down, a mutual respect was born between the two that turned into something more. Despite being a vampire, Tesla sometimes demonstrates much more humanity than a real human being.

Kurjak is a man like many others, who found himself wearing a uniform to fight a long war in the name of his country. The fratricidal conflict that involved him risked erasing the last traces of humanity in him, turning him into a cold killing machine. A one-piece soldier who doesn’t have too much trouble killing for the cause, Kurjak changes his mind when he discovers that, behind many wars, there are, in fact, the Masters of the Night. He begins to help Harlan in his crusade against vampires to avenge his fellow soldiers who have fallen victim to the undead. Her relationship with Tesla oscillates between irritation (the vampire is much stronger than any man and does not fail to point out to her soldier friend saving his life several times!) And a relationship of deep friendship that has resulted in falling in love. Now Kurjak knows which are the real enemies worth fighting! Together with Harlan and Tesla, Kurjak wants to free the Earth from the plague of the Masters of the Night with the only method he knows: violence!