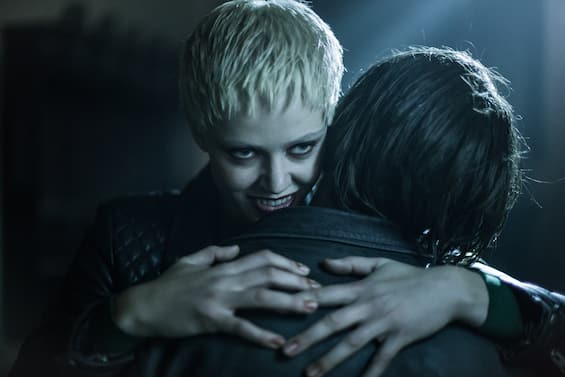 A few days after the announcement of its theatrical release on October 28th, Eagle Pictures has also released the first trailer of Dampyr, an Italian cinecomic based on the comic series by Sergio Bonelli Editore. The film will be directed by newcomer Riccardo Chemello for a co-production between Eagle Pictures, Sergio Bonelli Editore with his production arm Bonelli Entertainment, and Brandon Box.

Premiere at Lucca Comics and Games

Distributed by Eagle Pictures Dampyr will be released in Italian cinemas on October 28, simultaneously with the world premiere with cast to be held at Lucca Comics and Games. The film will in fact inaugurate the opening night of the famous community event dedicated to the world of entertainment.

A PRODUCTION OF OVER 15 MILLION DOLLARS

Shot entirely in English, Dampyr is a production with a budget of over 15 million dollars and is the first film of the Bonelli Cinematic Universe. Some of the best workers in Italian cinema worked on it: Hair Designer Giorgio Gregorini, Oscar winner® for Best Makeup and Hairstyle in the Movie Suicide SquadMakeup Designer Francesca Galafassi (game of Thrones, Ben-Hur), Vladimir ‘Furdo’ Furdik as Fight Choreographer (Skyfall, game of Thrones, The Witcher), Lubomir Misak as Supervising Stunt Coordinator (game of Thrones, The Last Legion, Kingdom of Heaven) and Giovanni Casalnuovo as Costume Designer (Wanted, Romeo & Juliet, Beowulf). The producers are Roberto Proia, Vincenzo Sarno, Andrea Sgaravatti.

The film, based on the comic series created by Mauro Boselli and Maurizio Colombo, is scripted by Mauro Boselli, Giovanni Masi, Alberto Ostini, Mauro Uzzeo. An all-international cast in which Dampyr is Wade Briggs (Still Star Crossed, Please Like Me, Foundation, His Dark Materials), Stuart Martin and Emil Kurjak (Jamestown, Doctors, Crossing Lines) and Frida Gustavsson is Tesla (Dröm, Eld Lagor, Arne Dahl, Vikings: Valhalla). At their side, David Morrissey as Gorka (Britannia, The Missing, Good Omens, The Walking Dead), Sebastian Croft as Yuri (game of Thrones, Horrible Histories: The Movie, Doom Patrol, Heartstopper) and Luke Roberts playing Draka (game of Thrones, Pirates of the Caribbean, 300: Rise of an Empire, The Batman).

The film tells the genesis of the character, published by Sergio Bonelli Editore in 2000 in the first two books of the 300 of which the comic series on newsstands every month is composed so far, thus leaving the door open to the first Italian franchise completely in English. Dampyr is set during the Balkan War, in the early nineties, and follows the story of Harlan. Haunted by horrific nightmares, Harlan makes ends meet by posing as a Dampyr (in Slavic mythology, a half-human, half-vampire) capable of freeing villages from what superstitious inhabitants naively deem terrible curses related to the vampire world. But when summoned by soldiers attacked by bloodthirsty creatures, Harlan discovers the truth: he really is a Dampyr. While trying to face a terrible “Master of the Night”, Harlan must learn to manage his powers and discover his origins. Accompanying him is a renegade vampire and a soldier seeking revenge.

The Bonelli Cinematic Universe is part of the Bonelli Entertainment project, the production arm dedicated to the development of film and television projects based on its characters, loved by generations of readers, such as the animated series Black Dragonan international co-production with Rai Kids, Power Kids and NexusTV, and James Wan’s 10-episode live-action in a co-production between SBE and Atomic Monster dedicated to Dylan Dog.