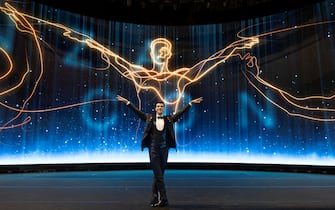 2022 will open once again under the sign of art with the fifth edition of the show Dance with me, written and conceived by the dancer Roberto Bolle. Aired in prime time on Rai 1 on 1 January 2022, the show – under the artistic direction of Bolle – will welcome the new year with guests from the world of music, cinema, television and literature, from John Malkovich to Ornella Vanoni

WATCH THE VIDEO: Roberto Bolle in the Chamber: “Dance victim of destruction”

It will be an edition “particularly cheerful and positive“, Explains Bolle,” to give a respite from the difficulties “and from the” open wounds “that the Covid-19 pandemic has left” humanly, socially and economically “. It will also be a moment of remembrance: the show is dedicated to the étoile Carla Fracci, who passed away on May 27th

The most famous Italian classical dancers, from Fracci to Bolle

DANCE WITH ME – “We focused on a thousand beautiful sides of life: the passions, the dreams, the stories that excite us and at the same time encourage us to never give up. We talked and, of course, danced, but also sang love and respect, friendship, the importance of keeping closely connected to others, because nobody saves himself alone”Said Bolle talking about Dance with me

Bolle reflects on the symbolic value of a prime-time program where dance is the protagonist. “Dance on television … it seemed madness and for some even a sacrilege, but it is in the DNA of TV to bring art and culture to everyone’s home, even those for whom much is precluded, far away, inaccessible. I believe that we should not give up the “superpower”Of this medium that can bring people to the theater, cinema, museums and help one more inclusive vision and righteous in the world, “said the dancer

WATCH THE VIDEO: The world premiere of Madina alla Scala

THE CONDUCTORS – To conduct the show will be Serena Rossi, former godmother of the Venice Film Festival 2021, together with Lillo, by the comic duo Lillo & Greg

During the evening, Serena Rossi will perform on the nights of ‘Respect‘, accompanied by the dancers of Silent Beat, the company of Irma Di Paola

THE GUESTS AND THE PROGRAM – Long list of guests who will accompany Bolle. Among these there will be John Malkovich, actor, director and film and theater producer. For the occasion, he will stage a theatrical piece, together with the musical duo Igudesman & Joo, formed by the Russian violinist Alexei Igudesman and the Anglo-Korean pianist Richard Hyung-ki Joo

The all-female cast of the film will then take to the stage “7 Women and a mystery“, Led by Ornella Vanoni. Together with the singer there will be Margherita Buy, Micaela Ramazzotti, Benedetta Porcaroli, Sabrina Impacciatore and Diana Del Bufalo

Boosta, co-founder and keyboardist of Subsonica, will accompany Bolle in two performances, between electronic and melodic music

Bolle will be on stage for a reflection on time and its relationship with love, together with the prima ballerina of La Scala, Virna Toppi, and the two actors Jasmine Trinca And Alessandro Borghi (together, in the photo)

To celebrate the golden 2021 for Italian sport, Bolle will perform together with the Olympic butterflies

Space also for the world of literature and television. The deepening of some of the most significant dance pieces in the lineup will be entrusted to the writers Nicola Lagioia And Silvia Avallone and to the host Franca Leosini (in the picture)

The world of dance will also be told through unusual points of view: those of the comedian Valerio Lundini and the actress Carla Signoris (in the picture), which will tell anecdotes and legends about dancing

Even at the crossroads between different arts, dance will always be the protagonist of the evening. International stars return to the stage, such as Svetlana Zakharova, absolute first dancer of the Moscow Bolshoi who will perform in the memory of Carla Fracci, performing the workhorse of the Milanese étoile, ‘Giselle‘

Marianela Nuñez, prima ballerina of the Royal Ballet of London, will perform together with Bolle ‘L’Histoire de Manon‘by Kenneth MacMillan and’Paquita‘by Marius Petipa, together with the young students of the Accademia della Scala in Milan

Bubbles, Virna Toppi and the dancers of Michele Merola’s MM Contemporary Dance Company will then dance on the piece ‘Waterfall‘by Mauro Bigonzetti

The artistic director of the show will launch into the reinterpretation of a tango, with the steps of classical dance, in ‘Alma Porteña‘, a triptych with music by Astor Piazzolla, together with Nicoletta Manni, on the choreography of Massimiliano Volpini and with the violin of Alessandro Quarta

In ‘Zorba the Greek‘, Bolle will dance with instead Timofej Andrjashenko, principal dancer of the Scala, choreographed by Lorca Massine

Two pieces will follow the steps of contemporary classical dance. The first will be ‘Borderlands‘by Wayne McGregor, played by Bolle and the soloist of the London Royal Ballet Melissa Hamilton

It will then be the turn of ‘With a chance of rain‘by Liam Scarlett, with the young woman Agnes of Clemente of the Scala in Milan

The direction is for the third consecutive year entrusted to Cristiano D’Alisera. The show is produced in collaboration with Ballandi and Artedanza srl. To write it, together with Bolle, Pamela Maffioli, with Rossella Rizzi, Luca Bizzarri and Giovanni Bognetti. The scenes are by Marco Calzavara, while the photography is by Marco Lucarelli. The graphic design and the staging are by Cristina Redini, the musical consultancy by Giorgio Oreglio. Production manager is Massimo Tomirotti. The show is curated by Francesca Bignami