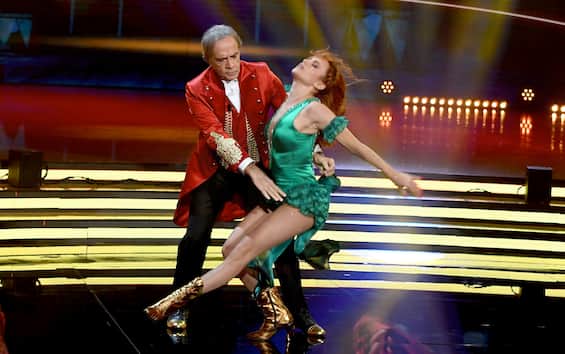 In the gym of dancing with the Stars the competitor Enrico Montesano during rehearsals he wore a black T-shirt of the Decima MAS, a special unit of assault vehicles of the Royal Italian Navy known for its collaboration with the Nazis and for its hostility to the partisans, which carried D’Annunzio’s motto “Memento Aude Semper” (” remember to always dare “). The journalist Wild Lucarellisworn in the program conducted by Milly Carluccireported the incident on Twitter, which was broadcast on Rai Uno on November 12: “From yesterday’s images I see Montesano rehearsing Dancing with the T-shirt of the Decima Mas which, if anyone escapes, is a military formation that fought alongside the Nazis against the partisans, as well as a symbol of neo-fascism ”. Immediate the disqualification of the actor, communicated in a note from Viale Mazzini: “What happened last night in dancing with the Stars, broadcast on Rai Uno, is unacceptable. It remains inadmissible for a competitor to a public service television program to wear a T-shirt with a motto and a symbol that evoke one of the darkest pages in our history. We apologize to all viewers and, in particular, to those who have paid and suffered personally because of the Nazi-fascism to which that symbolism refers. It is therefore Rai’s decision to interrupt Enrico Montesano’s participation in the Saturday evening broadcast dancing with the Stars“.

THE SOCIAL EXCUSES OF MONTESANO

Following the decision of Rai Montesano he published on Facebook an apology post: “I am deeply sorry and saddened by what happened during the rehearsal of the program. I am a collector of shirts I have that of Mao, of the USSR, but I do not agree with this thought. There was no intention in me to promote political messages or an apology for fascism from which I am profoundly distant. I have always been a free and democratic man. I believe in the values ​​of the Constitution and I deeply apologize to those who have felt offended and upset. It was naïve. I have nothing to do with Nazi-Fascism and all totalitarianisms and I deeply despise them. I still apologize. ”The comedian, who also posted on Telegram a photo from 1976 in which, in front of the image of the revolutionary Che Guevara, he shows the PSI card, he then continued: “I declare my absolute good faith and I remember being a left-wing parliamentarian, in line with my faith a policy that certainly cannot be compared to the fascist one ”. In defense of him, Montesano finally added that “the shirt I wore was viewed by the representatives of Rai both during my rehearsals of the artistic performance and during the recording of the same, without any objection. I would add that the material edited and then broadcast was further examined by the representatives of Rai who did not in the least doubt the regularity and legality of the images ”. The plaintiff finally entrusted his lawyer with the task “of examining the situation to better protect my personal identity and my integrity”.

It is not the first time that Montesano’s views have raised controversy. During the pandemic, the actor has repeatedly expressed No Vax and No Green Pass positions supported by conspiracy theories and incitements to civil disobedience. Among these, “no bank, withdrawing liquidity from current accounts, separating the subscription fee and canceling the Rai subscription. Don’t see generalist channels. Do not consume, do not follow programs anymore. We, consumers and users, have the power.

THE COMMENTS OF ANPI

Before Rai took action on the Montesano case, the National Association of Partisans of Italy (Anpi) had issued a statement on social media: “Montesano harangued the no Vax inviting them not to pay the Rai license fee. Try today dancing with the Stars with the X Mas shirt, known for its collaboration with the Nazis and the ferocity against the partisans. A shame that offends the victims of Nazi-Fascist crime and the Resistance, the root of the Republic. We await serious measures from the Parliamentary Commission for the supervision of radio and television services ”. On Twitter the Anpi finally expressed its satisfaction with the verdict of Viale Mazzini: “A dutiful decision that has received the indignation of many and many democrats and anti-fascists”.