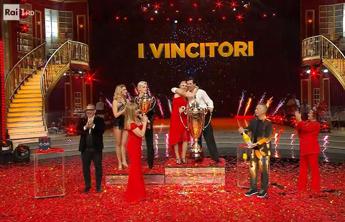 The victory of Luisella Costamagna and Pasquale La Rocca ignited Twitter, where there was a cry of scandal for a rigged vote

“It’s all a Costamagna, magna”. Selvaggia Lucarelli closes the final of Dancing with the Stars 2022 with this post in the middle of the night, marked by a heated controversy between the judges. The victory of Luisella Costamagna and Pasquale La Rocca, a couple rescued after the journalist had withdrawn due to an ankle injury in the sixth episode, ignited Twitter, where there was a shout of scandal for the outcome of the vote which relegated to second place the model and actor Alessandro Egger and the dancer Tove Villfor. “Everything prepared shame, Selvaggia Lucarelli was right,” reads some of the comments. And again: “They wanted Costamagna to win, Egger had 60% of the votes on social networks”.

The social vote of viewers is precisely the one at the center of the controversy, given that no one knows the specific weight of the jury’s judgments and social likes. Many users with red-hot chirps turn the spotlight on suspicious likes, with consequent conspiracy theories on the possibility that bots have taken the field to generate fake likes. Milly Carlucci also intervened on this point, clarifying that the program has set up a task force that verifies the veracity of the like on an Instagram, Twitter or Facebook profile in real time.

The explanation apparently did not convince Selvaggia Lucarelli, who joked on Instagram with a story with a black background and the writing “the task force” and later with the phrase “Now Pasquale La Rocca goes to Ukraine and wins the war”.