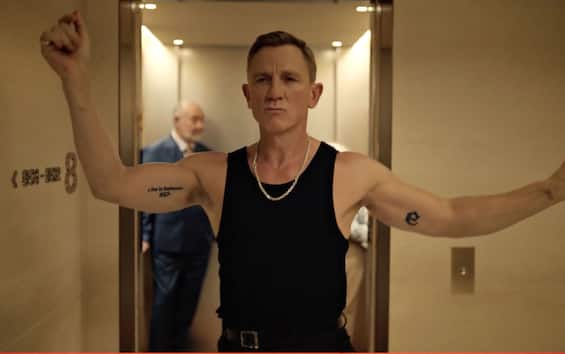 Daniel Craig like you’ve never seen beforean overused but very valid formula if we talk about the commercial that the actor shot for Belvedere Vodka under the guidance of Taika Waititi. The short movie, just over two minutes in the director’s cut available on the YouTube channel of the Polish distillate distributed by the luxury giant LVMH, shows the British actor in an absolutely new guise, that of a fifty-four-year-old man who has definitively hung up the tuxedo of the double zero licensed British counterintelligence secret agent James Bond.

The bright side of Daniel Craig

The season of a killer with a license to kill has been wrapped up, Daniel Craig, multiple BAFTA and Golden Globe nominated actor, says his right to do as he pleasesfinally, on the strength of an immense popularity acquired not only thanks to action films based on the novels of Ian Fleming, but also of blockbusters such as Millennium – Men who hate women And Knives Out – Dinner with a crime. Finally, that is, Finallywhich is both the exclamation that accompanies a long-awaited moment and the title of the author spot of Vodka Belvedere, the filmed story of the path that leads the actor to his drink: a vodka with ice. On the way to his suite at the Cheval Blanc Hotel in Paris, Craig abandons the image of the actor we know for embrace her bright side: dribbles the fans, dodges the photographers, ditches the formal white suit, gets into the car and comes out with a macho outfit, complete with sunglasses, eye-catching necklace and leather jacket (Dior, Vuitton and Tiffany wardrobe), crossing the city with light steps, a liberating walk which becomes more and more one wild choreography.

Heedless of the other hotel guests, the actor, in a tank top, flexes his muscles as in Casino Royale and shakes on the groove of the original soundtrack composed by Rita Ora (now Mrs. Waititi) with the rapper Giggs, climbs onto the rooftop of the building, pours himself a drink and… is filmed by the director who invites him to do the scene over again, making himself “a little more himself”. It is clear that on this set nobody takes themselves seriouslyfrom Waititi, who is one who hardly turns on the camera without having fun, to Daniel Craig who flaunts a flashy grillza tooth jewel with his initials that is the coup de grace to the image of the serious agent in His Majesty’s service. Is he just joking? Or should we imagine that this master dancer, who crawls on the surface of the water in the style of a Broadway musical, has arrived to definitively replace the imperturbable interpreter of Benoit Blanc, the detective of Knives Out – streaming soon with the new adventure glass onion)? It is another foray into the world of advertising by Mr.Craig, already accustomed to this sector (only for No Time to Die had made campaigns with Omega and Heineken), or the last one entertainment about Waititi bothering Beyoncé’s choreographer, JaQuel Knight, to let us see the Brit move her hips like never before? Time will answer these questions, for now it seems quite clear that Daniel Craig is tired of showing only a part of himself and it is probable that in this new phase of his career he will want to amaze us with light roles and very far from those he has us to accustomed by following in the footsteps of many of his colleagues who with middle age have acquired awareness and sense of humour (Does the name Brad Pitt mean anything to you?)