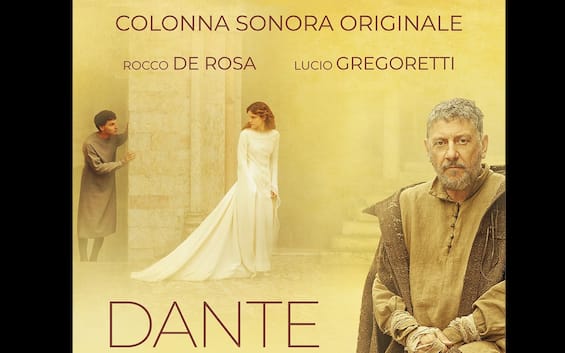 The soundtrack of the film is available digitally from Friday 30 September Dante by Pupi Avati composed four hands by Lucio Gregoretti and Rocco De Rosa (co-published and co-produced by Edizioni Curci with Concertone Srl.).

“Two musicians close by age and yet very distant from each other for musical studies, expressive worlds, character. Complementary in evoking a romantic and remote world, Lucio Gregoretti with his classicism, Rocco De Rosa with his archaicism”Says Pupi Avati who personally chose the two composers. For the occasion we met Lucio Gregoretti, a talented and versatile artist, an authentic Master of both applied and concert music.

This is his fourth collaboration with Pupi Avati, after “The Bad Child”, “Dony’s Radiance” and “She still talks to me”. What is the first thing that you came to mind when the director proposed to you to compose the soundtrack of Dante?

I thought it would be the hardest. It is a film that Avati cared very much for which he expected the best from all the collaborators. And then it is a very particular work. From the setting to the subject it was possible to approach the story in the most diverse ways, while on other occasions, the situation was more univocal and, therefore, in some ways simpler.

How was the collaboration with Rocco De Rosa, the other author of Dante’s soundtrack?

We divided the scenes according to our peculiarities, opting for those that we felt closest to our sensitivity. And sometimes we swapped the sequences, depending on how the work was going. In short, it was a constant work in progress.

What relationship does Pupi Avati have with music and soundtracks?

By virtue of his musical background, compared to other directors, he has a more specific, more technical competence. He also has a great sensitivity, so it is a pleasure to work with him.

Do you have a different approach when composing for the cinema, compared to the theater at the opera?

Yes, that for the big screen is music that is written to be recorded, that for opera is performed live. This is the most obvious aspect. And then every form of artistic expression has its own characteristics.

William Burroughs said, “What we see is largely determined by what we hear.” Do you agree?

I would say yes. And it’s not just a feeling. It has been scientifically proven. Just think of the McGurk Effect. Our perception is always “multimodal”. Our senses collaborate and learn together. It is always a mediation between what you see and what you hear.

For Robert Bresson “cinema is closer to music than to theater or the novel.” What do you think?

Probably the obligatory temporal scansion unites cinema and music. The film is immutable, it takes place in a precise and predetermined time. In this sense, literature and theater have fewer constraints.

I have wonderful memories related to the music composed for Lina. I always collaborated in collaboration with Lilli Greco, producer and composer, even if he preferred to define himself as a pianist. Wertmüller had a very different approach than the other directors I have worked with. Her soundtrack was born with her. She worked at her house and her lyrics were born together with the music, when we dealt with musical comedies

He was also a pupil of Ennio Morricone

We shared the double track of applied music concert music. And Ennio gave us this example We turn on the television and see a film with mediocre, poor music, however the soundtrack is perfect for those images. Then the composer fulfilled the task of him. But if we are not true composers we must not be satisfied, we must aspire to the best, write good music, regardless of the destination it will have. It is a teaching that I always take into account. And then I dated him in the latter part of his life. On some occasions, when I accompanied him to public events. I had an instinct to protect him. It was very popular and was assailed by many requests from the public. It probably wasn’t required protection but it was something I felt like doing.