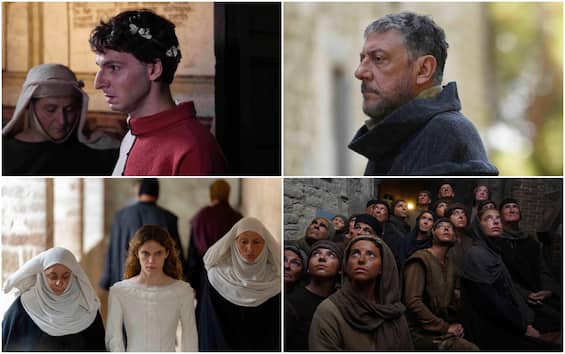 “Being able to narrate Dante Alighieri for his humanity was that gift I had been waiting for twenty years”. Thus the director Pupi Avati talks about his dream, long pursued and now come true: to make a film about Dante. A cinematographic enterprise that today, September 29th, arrives in Italian cinemas with 01.

Dante it is set in 1350, when Giovanni Boccaccio was commissioned to bring ten gold florins to Sister Beatrice, daughter of Dante Alighieri, a nun in Ravenna in the monastery of Santo Stefano degli Ulivi. Dante died in 1321, and his last 20 years have been marked by the difficulty and suffering of seeking hospitality after a condemnation to the stake and beheading inflicted on both him and his sons, who in turn fled from Florence. This is the purpose of the 10 florins, a symbolic compensation for the confiscation of assets and the unjust sentence. Against that part of the ecclesial world that considers the Comedy a diabolical work, Boccaccio accepts the task of reaching Sister Beatrice, also to be able to carry out an investigation on Dante that allows him to narrate the human story and the injustices suffered. During the long journey Boccaccio, in addition to his daughter, will meet those who, in the last years of the Ravenna exile, sheltered and welcomed the Supreme Poet and who, on the contrary, rejected him. Retracing part of Dante’s journey from Florence to Ravenna, stopping in the same convents, in the same villages, in the same castles, in the opening of the same libraries, in the questions he asks and in the answers he gets, Boccaccio reconstructs the human story of Dante, to the point of being able to tell us his entire story.

The places of the film, between Italian villages and castles

Boccaccio’s adventure to reach Sister Beatrice is an “on the road” journey, back and forth in time, which also shows a gallery of villages, castles, fiefdoms, churches and frescoes of central Italy, often excluded from major tourist itineraries . Here are some stops not to be missed, to discover how often real places in cinema lend themselves to “interpreting” famous places of fiction.

The loved and hated. Dante’s city is the starting point of Boccaccio’s journey. You can recognize it in some shots, but for most of the story the “real” Florence of the film is elsewhere. Even the scene of the papal court of Avignon in front of the frescoes of Santa Maria Novella is actually reconstructed in Cinecittà.

Via Maestà delle volta: a cart runs along the road and stops in front of a house. Here it is the Florence of the fourteenth century, with Boccaccio going out with the maid Bruna del Ciango, bringing with him the furnishings necessary for the long journey and the baby Jesus doll, the ideal link between the Beatrice loved by Dante and the daughter of the poet of the Decameron. But the Umbrian capital “lends” to the film also the Abbey of Santa Maria Valdiponte in Montelabate, which with its splendid Benedictine cloister becomes S. Stefano degli ulivi in ​​Ravenna where Boccaccio, at night, will finally meet Sister Beatrice.

The fourteenth-century Florence of Pupi Avati is then in the silence of the Tiber Valley. Here the Balthus Castle becomes Casa Alighieri, with the bedroom where Dante as a child witnesses the death of his mother, a crucial episode in his entire life. In the Borgo the houses of Gano del Forese, of the Bardi and the room where the Priors vote for the exile of the rioters have also been rebuilt.

With the beautiful frescoes by Gentile da Fabriano, the fourteenth-century Palazzo Trinci – now home to the Civic Art Gallery and the Archaeological Museum – hosts some key scenes. The first take of the film was shot in the chapel, with Gemma Donati resisting her marriage to Dante in the bedroom. But there is also the quarrel with Manetto Donati who, when asked for a loan from Dante to compete for the priory, responds instead by accusing him of not having made his daughter happy. And again, on the staircase, the Poet arrives to visit his friend Guido Cavalcanti, whom he himself condemns exile.

Unique and spectacular naturalistic site south of the Po Delta, in the film the valleys welcome the journey by cart of the elderly Dante together with his friend Menghino Mezzani towards Sant’Apollinare.

It is the last stage of Dante and then of Boccaccio. Here Alighieri was welcomed and hosted with great admiration by his friend Guido Novello da Polenta and then buried with great honors in the Church of San Francesco (once San Pier Maggiore). In the film we recognize some glimpses of it: Dante on the cart that crosses the Pineta di Classe (“the divine thick and living forest” of the XXVIII of Purgatory) and then via Fossatone with Boccaccio thirty years later. But above all the Basilica of S. Apollinare, which with the magnificence of its Byzantine mosaics dazzled the Poet, inspiring many images of the Divine Comedy. Like the souls of the XIV Canto del Paradiso gathered around a shining Christ, just like the 99 stars of the sky in the apse of the Basilica shining around the large jeweled cross.

Pupi Avati: “I always thought that the Divine Poet should be compensated”

“In my many films I have told how exceptional, even heroic, the normality of human beings can be. Now, on the other hand, I have tried to say that, however sublime, genius shares, as each of us would, the anxieties that life reserves for us ”, said Pupi Avati speaking of the film. Then he explained: “A militant and not very affectionate Dante has always been celebrated and so at school we hated him, they did everything to get him away and instead we have to bring him closer to us. I always thought that the Divine Poet should be compensated ”. Parallel with Dante? “Yes, adolescence – said Avati – When I was fifteen I went after a certain Paola Zuccotti for three years without ever hearing her voice. In short, I recognized myself fully in the love story that Dante tells in Vita Nova”.

Sergio Castellitto: “Dante was one of us”

“’In the middle of the journey of our life’ is a bit of a psychiatric piece – said Sergio Castellitto – No one has ever dared to tell his life and even less the Divine Comedy, Dante’s only word remains and that cannot be represented. They forced us to study him, but no one ever told us that he had been thrown out, he was a soldier and he had also been poor. In short, he was one of us. But Dante was also a poet, one capable of entering a black hole and pulling out a gold nugget ”. “This is a film that stinks – concluded the actor – Boccaccio, if you think about it well, has made a long and very tiring journey, he has scabies, he is hungry. And these human imperfections can all be seen ”.