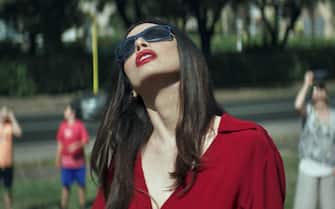 Ilenia Pastorelli is the protagonist of “Occhiali Neri”, the new film by Dario Argento which arrives in cinemas starting from 24 February

Black Glasses, The interview with Dario Argento and the two actresses

In Occhiali Neri, Ilenia Pastorelli plays Diana, an escort. When a serial killer chooses her as prey, the girl, to escape her attacker, crashes into a car, losing sight of her. From her trauma, Diana resurfaces determined to fight for her survival, but she is no longer alone. To defend her and to see for her now there are Nerea, her German wolf dog, and the little Chin, who survived the accident

Black Glasses presented at the Berlinale 2022

Asia Argento in Black Glasses plays Rita, an instructor for the blind who becomes friends with the character played by Ilenia Pastorelli. This is the sixth film in which the actress is directed by her father Dario. Asia in addition to acting also took part in the production of the film

Black Glasses, the teaser and the poster of the film

Emmanuelle Seigner, French actress and model, wife of director Roman Polanski in Dario Argento’s Yellow (2009) plays Linda Jefferson, a woman who tries to discover the identity of the serial killer who murdered her sister Celine

The best films of Roman Polanski

Asia Argento in La Terza Madre (2007) is Sarah Mandy, a young American archaeologist who came to study in Rome. The film represents the final chapter of the saga of The Three Mothers which includes Suspiria and Inferno

Moran Attias, Israeli actress, model and TV presenter, in The Third Mother plays the role of the sadistic and terrifying witch who responds to the name of Mater Lacrimarum

Chiara Caselli in I am not sleepy by Dario Argento (2002) plays Gloria, harp player

Rossella Falk in I am not sleepy and Laura De Fabritiis. This is the last film starring the great Italian actress who passed away on May 5, 2013

Asia Argento is Christine Daaé, the protagonist of The Phantom of the Opera, a 1998 horror film directed by Dario Argento, loosely based on the novel of the same name by Gaston Leroux

Asia Argento in Stendhal’s Syndrome plays the role of Deputy Inspector Anna Manni, a policewoman who hunts down a serial killer who works between Rome and Florence

Asia Argento was directed for the first time by her father Dario in Trauma (1993). This is Argento’s second film shot in the United States after Two Evil Eyes directed with George A. Romero

Cristina Marsillach is Betty, a young soprano in the 1987 Opera film written and directed by Dario Argento

Jennifer Connelly is Jennifer Corvino in Phenomena by Dario Argento (1985). The actress plays the role of her an American student sent to study in a boarding school in Switzerland. With the help of an entomologist, Jennifer, suffering from sleepworm, tries to discover the identity of a brutal serial killer

Dalida Di Lazzaro is the principal of the college in Phenomena

In Inferno by Dario Argento (1980) Irene Miracle plays the role of Rose Elliot, a New York poet who bought an ancient book entitled The Three Mothers

In Hell Eleonora Giorgi is Sara, a student friend of Rose

In the movie Inferno, Ania Pieroni is a musicology student, but she is probably the terrifying Mater Lacrimarum

Jessica Harper in Suspira by Dario Argento (1974) plays the role of Susy Benner. she is a brilliant ballet student who decides to perfect her artistic skills by enrolling in the prestigious dance academy in Freiburg.

In Profondo Rosso Giuliana Calandra plays Amanda Righetti, author of the essay “Ghosts of today and black legends of the modern age

Marilù Tolo: plays the role of the countess of the barricade in The Five Days of Dario Argento (1973)

Mimsy Farmer as Nina Tobias, the protagonist of 4 Flies of gray velvet by Dario Argento (1971)

In The Nine-Tailed Cat, Catherine Spaak plays Anna, daughter of Professor Terzi, director of the Institute;

In The Bird with the Crystal Feathers, Dario Argento’s debut film, dated 1970, Suzy Kendall is Giiula, the girlfriend of Sam Dalmas, an Italian-American who works in Rome