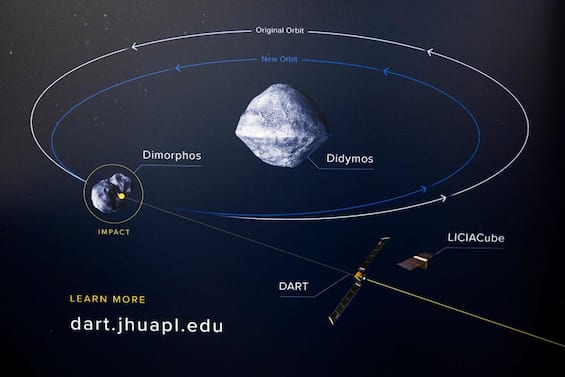 The trajectory of the small asteroid Dimorphos was actually modified by the impact of NASA’s Dart probe, in the first planetary defense experiment that took place in the night between 26 and 27 September last and documented by the Italian minisatellite LiciaCube, managed and coordinated by the Space Agency Italiana (Asi) and made by the Argotec company. This was stated by the chief administrator of NASA, Bill Nelson, in the press conference organized by the American space agency. “Dart has altered the orbit of the asteroid Dimorphos and the confirmation came from the telescopes.”

“A turning point for the defense of Humanity”

This is “a breakthrough for the defense of the planet and a turning point for humanity “, he underlined

Nelson. It would already have been “considered a huge success if (the spacecraft) had reduced the orbit by about 10 minutes. But it actually reduced it by 32 minutes,” he added. With this

mission, he later pointed out, “NASA has shown itself to be serious as a defender of the planet,” he said. Dimorphos, located about 11 million kilometers from Earth

at the moment of impact, it has a diameter of about 160 meters and does not represent a danger to the Earth. If the goal remains relatively modest compared to the catastrophic scenarios of science fiction films like ‘Armageddon’, this unprecedented “defense of the planet” mission,

called Dart, is the first to test such a technique. It allows NASA to prepare in case an asteroid threatens a day of hitting the Earth.