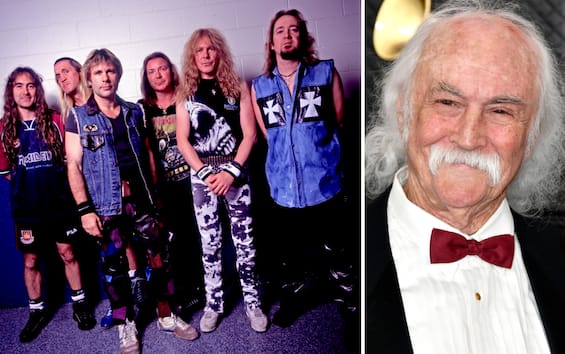 David Crosby criticized Iron Maiden, writing on Twitter that the music of the legendary heavy metal band is “noise”.

The American singer-songwriter is the sacred monster of folk (of which he wrote the history, together with his colleagues Stephen Stills, Graham Nash and Neil Young) but – although it is a real living musical monument – he is not allowed to touch anyway. another living musical monument, precisely the one composed by Bruce Dickinson, Steve Harris and associates.
The reactions of Iron Maiden fans were not long in coming: a storm of tweets from Dickinson & Co. loyalists rained on Crosby. Those who joined the choir to beat the folk artist warmly invited him to go and see the Iron Maiden live to understand how far his criticism is…

However, it is quite understandable that David Crosby, 81 years old, as a person over the age and above all totally innervated with folk, ballads and stars and stripes songwriters, does not have adequate ears to appreciate heavy metal properly. But what is questionable is the lack of respect towards colleagues, indeed: towards th Colleagues. Tweeting that established musicians who boast a very affectionate following make music that cannot be defined as such is a symptom of an enormous lack of tact, as well as a symptom of a lack of wide-ranging musical culture, if Crosby allows it to us without taking offense. ..

“Heavy metal, as most of us know, is not for everyone. However, legendary songwriter David Crosby raised more than a few eyebrows on Twitter last night (Oct 22) when he publicly described none other than living heavy metal icons Iron Maiden as “noise,” prompting a wave of Maiden defenders. to get to mention it (massively) ”writes Classic Rock’s Merlin Alderslade in the US magazine Louder.

At the bottom of this article you will find the “offending” tweet, the one with which David Crosby made his unhappy release on Iron Maiden.

It all started with a tweet with which David Crosby replied to another tweet, that of his great friend Vin Downes. The latter, guitarist, incensed Iron Maiden by posting a clip of their live and writing: “They are still united as always [e] give an extraordinary show “.

At that point Crosby tweeted: “It’s so weird to me that you like that one noise“. Heaven open… Whole legions of Maiden fans took to the field to point out to Crosby that perhaps he was a little too hasty in interpreting and judging the holy monsters of British metal.

He intervened in the quarrels also the Testament guitarist, Alex Skolnick, who in a polite and respectful way allowed himself to suggest to Crosby to attend a live of the band in person, because only in this way could he fully understand the enormous charm and the incredible power of the Iron Maiden.
“David, it must have been experienced live,” Skolnick tweeted. “Energy is contagious. Let Vin Downes drag you to one of their shows sometime. You might be surprised!”

Although Skolnick’s tweet also received unpleasant responses – some of which rudely argue that you don’t have to go to see Iron Maiden to appreciate them – the invitation from the Testament guitarist hit the spot in the spirit of the whole story. debate on the net.

If David Crosby agrees to take Alex Skolnick’s advice, he will be spoiled for choice, as Iron Maiden recently announced their Future Past tour, which kicks off next summer (but for now it will only take them to perform in Europe and in the UK, not in the States, where David Crosby lives).

In Italy the band will play on July 15, 2023 at the SNAI Hippodrome in Milan, with Radiofreccia official radio of the event.

Bruce Dickinson against the grass

It’s funny that Crosby’s critiques come almost simultaneously with an episode that happened during an Iron Maiden concert, a fact that sees weed as the protagonist.
During the Maiden show at the Honda Center in Anaheim, California, frontman Bruce Dickinson strongly criticized some fans, saying they were too smoky in the front rows.
“There are a lot of people down here who are smoking so much fucking weed that I’m amazed anyone behind even gets to see the concert,” Dickinson said. “Poor Steve! I don’t know if you know but he absolutely hates marijuana and the smell of it. Hearing her trying to play bass bothers him. And that’s it for me, I have to sing. So please have some respect and if you want to get totally high, go and do it after all ”.

A relationship with marijuana very different from the one that the counterculture and folk (of which David Crosby was largely a part) entertained often and willingly, according to clichés …

The appeal not only to David Crosby but to everyone is what the Italian radio Radiofreccia does, the official radio of the Iron Maiden concert to be held in Italy on July 15, 2023.
“If you want to follow the advice of the Testament guitarist and go see Iron Maiden live to appreciate all their power, the legendary heavy metal band will return to Italy in 2023 for just one concert” writes Gianluigi Riccardo on the radio website.

Iron Maiden will in fact be the headliners of The Return Of the Gods festival, which will be held on July 15, 2023 at the SNAI Hippodrome in Milan. The band will be on stage with The Future Past Tour, which will see great classics in the lineup, songs never performed live from the latest album Senjutsu and also excerpts from Somewhere In Timelegendary 1986 album.

Below you will find all the dates of the Iron Maiden tour, which will start on June 9, 2023:

Below you will find instead the “offending” tweet, the one with which David Crosby made his unhappy release on Iron Maiden.