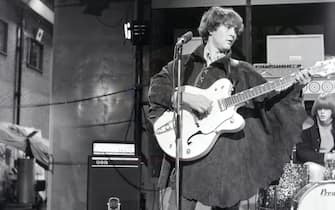 From the sixties David Crosby, who died on January 19 at the age of 81, shaped the folk and country undertones of American songwriting. The legendary singer, guitarist and songwriter, founder in 1964 of the Byrdsauthors of famous songs such as So You Want To Be a Rock’n’Roll Star And Turn! Turn! Turn! and the number one charted cover of Mr Tambourine Man by Bob Dylan, left the band after only 3 years due to differences with Roger McGuinn, who described Crosby and his political speeches on stage as “unbearable”

Goodbye to David Crosby, the great guitarist and songwriter died at the age of 81

In the 1968 Crosby trained with Stephen Stills And Graham Nash the group Crosby, Stills & Nashwhich sold millions of copies of the first two albums and which, in 1969welcomed Neil Young. The band enriched the music history of the seventies thanks to the songs Déjà Vu, Almost Cut My Hair And Long Time. Crosby, Stills, Nash and Young are there loose in the 2016 after years of rivalry and tension: in an interview with GuardianCrosby called Nash “my enemy” and Young “the most self-centered, most self-obsessed, selfish person I know”

In the 1967 Crosby found out Joni Mitchell while playing a club in Florida. The musician accompanied her to California, where she helped record and produce her first album, Song To a Seagull. The couple also had an affair, and in an interview with Guardian in 2021 Crosby described the singer “the best singer-songwriter…I don’t think anyone comes close”

Joni Mitchell to Elton John: ‘My new album is coming’

After a bout of alcohol and drugs on the boat he moved to, in the 1971 Crosby engraved a solo disc with dense harmonies, If I Could Only Remember My Namein which Graham Nash, Neil Young, Joni Mitchell and members of the Grateful Dead and Jefferson Airplane appear, among others

“It was a strange situation. I felt as if I had been punched and once I ended up on the ground with broken teeth, a tractor had run over me. But then, maybe on the same day, I was over the moon. I made music that I adored, I believed in it, it moved me. I was feeling as much joy and sadness as possible at the same time,” Crosby told Rolling Stone. The record, however, received a lukewarm reception from critics. “He didn’t get it, they wanted me to follow the trends”

Joni Mitchell announces her own concert after 23 years

In the 1983 Crosby was convicted of cocaine possession and possession of a firearm. Escaped from California to Florida while on bail, he turned himself in 1985 and spent five months in prison, where he cleared of hard drug use.

Rolling Stone chooses the 200 best singers of all time. The top 20

Crosby was drafted twice in the Rock and Roll Hall of Famethe first in 1991 for work with the Byrds and second in 1997 for the one with Crosby, Stills, Nash & Young. Additionally, five albums to which the singer-songwriter contributed were included in the Rolling Stone’s 500 Greatest Albums of All Time

During the mid ninetiesCrosby found again James Raymond, whose existence he discovered only 30 years after his birth because he was given up for adoption by his mother. Pianist and composer, Raymond has accompanied his father on performances, from albums with the Lighthouse Band to solo records For Free, recorded in his garage during the pandemic. “James and I have incredible chemistry,” Crosby told Rolling Stone

Bob Dylan apologizes for signing software on books and artwork

“I know people tend to focus on the precariousness of our relationship,” she wrote Nash Crosby’s death” but the thing that mattered most to us, always, is the pure joy of the music we created together”

River, the animated video of the song by Joni Mitchell

Between 2014 and 2021Despite his advanced age, Crosby has released five solo albums. “I’m 80 so I’m going to die pretty soon. That’s how it works,” she said in 2022. “And so I’m really trying to get as much music out as possible, as long as it’s really good”

Bob Dylan painter, his exhibition on the visual arts at the MAXXI in Rome