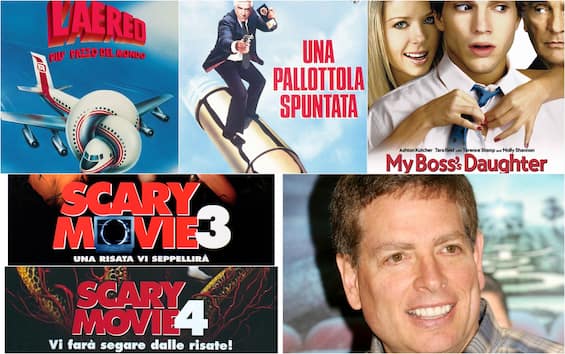 David Zucker, the director of The craziest plane in the world And A blunt bullet, turns 75 and continues to be talked about. Lately he has attacked the “politically correct” which, he said of him, is ruining the comedy in the cinema. “Comedy is not dead. It is scared. And when something is scared it hides,” she said last year in an interview with the New York Post. From his beginnings to his latest experiments behind the camera, here is a selection of his most famous films.

The craziest plane in the world

David Zucker directed with his brother Jerry and Jim Abrahms great Hollywood comedy-parody hits. Surely one of the most famous is The craziest plane in the world (1980) which tells the incredible vicissitudes of the passengers on a direct flight to Chicago with grotesque comedy. The protagonist of the film is a former pilot named Ted Striker who hates airplanes, but who overcomes his aversion and gets on the flight to Chicago to win back his ex-girlfriend who is a stewardess. Anything will happen: the passengers will be hit by a very serious food poisoning and the landing of the plane will be put at risk. And so only the former driver Ted can solve the situation. The film received a Golden Globes nomination.

The film A blunt bullet (1988) instead represents a parody of the detective genre. The protagonist is Frank Drebin, a Los Angeles detective who combines all. The superiors suspend him on the occasion of Queen Elizabeth’s visit to the city. The detective is convinced that there is an attack in preparation, but he will find himself alone having to fight the terrorists’ plan. The film was a box office success and also had two sequels: A blunt bullet 2½ – The smell of fear (1991) and A blunt bullet 33⅓ – The final insult (1994).

In 2003 Zucker made the film My boss’s daughter. Tom wants to impress his boss favorably and decides to win over his daughter Lisa by offering to watch over their house for one night. But the task turns out to be tougher than expected. To interpret Tom there is a very young Ashton Kutcher who is the protagonist of a film where the classic irony in Zucker’s works returns bursting.

Scary Movie 3 – A laugh will bury you

In place of the Wayans brothers – who leave the series – Zucker arrives in 2003 to direct Scary Moovie for the third chapter, A laugh will bury you, and it’s a success. The story revolves around the reporter Cindy Campbell who is looking for the scoop. But all of a sudden she will be faced with a series of events that threaten the planet, including an invasion of aliens who leave crop circles, murderous videotapes, prophecies dictated by an oracle, children with supernatural gifts and ambitious rappers. All with the irony that distinguishes Zucker’s works. The director also directed the fourth film in the series.

In this new chapter (from 2005) Cindy Campbell is the keeper of an old house who falls in love with her neighbor. But the earth is invaded by very strange creatures and Cindy will find herself facing many and zany adventures with her friend Brenda of hers. The film makes fun of the likes of War of the Worlds, The Village, Million Dollar Baby and horror The Ring And The Grudge. In particular, the teasing focuses on actor Tom Cruise.