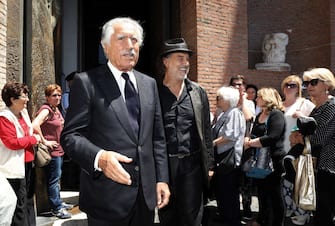 Gerlando Buzzanca known as Lando was born in Palermo on August 24, 1935 (although some sources report the day after). There he will live until he is 17, when he will move to Rome.

The beginnings in the capital will be difficult. Lando, who comes from a family of actors, studies acting at the famous Sharoff Academy between odd jobs. He is a waiter but also a gigolo waiting for the right opportunity on the screen

Lando Buzzanca’s cinematic debut came in 1959 in a historical film, not only for the setting. It’s about Ben Hurwhere the actor appears in the small part of a slave

However, Lando Buzzanca’s first real cinematic performance comes a couple of years after his debut, in a larger role. The film is a classic of our cinema: Italian divorce by Pietro Germi. Here Buzzanca plays the character of Rosario Mulé

Totò, the most famous phrases

Slowly the actor begins to create his own character, that of the provincial lover of women and often not very clever. This recurring mask will also lead him to collaborate with great directors. In 1963 he appears alongside Catherine Spaak in The parmesan by Antonio Pietrangeli playing the obtuse boyfriend of the protagonist

The following year it was again Pietro Germi who gave him a large part, that of Stefania Sandrelli’s brother in Seduced and abandoned

In the 1960s he also showed his more openly comic vein by backing Totò in Totò by night n. 1 and Toto Sexy

In 1967 he earned the leading role in Don Giovanni in Sicilyby Alberto Lattuada. In the film, Buzzanca is a playboy only on paper, engaged in the difficult task of understanding the opposite sex

In the early years of his career Lando Buzzanca worked with the best directors on the Italian scene: Germi, Pietrangeli, Risi, Nanni Loy and even Elio Petri (who would direct him in the neorealist The contact daysthe). Then in the seventies he began to play roles in less authorial films, resulting in an appreciated character actor in films where he often returns to play the fiery Sicilian

On television he leads together with Delia Scala an experimental variety for the times: Mr and Mrs. Here moments of pure variety alternate with skits that anticipate the format of future sitcoms. Buzzanca’s joke “I feel like laughing” becomes a catchphrase

For the movie The referee from 1974 demonstrates his ability to step into other people’s shoes. The referee, Carmelo Lo Cascio from Acireale, is in fact clearly an almost double of the most famous referee in Italy at the time: Concetto Lo Bello

Between the end of the Sixties and the Seventies, Lando collaborated several times with yet another great director of his career: Lucio Fulci. Together the two will shoot three films: Operation Saint Peter, Despite appearances… and as long as the nation doesn’t know it… All’ladies like women and The cav. Demonic constant Nicosia or: Dracula in Brianza

The eighties gave him little space in the cinema, also because for Buzzanca’s tastes the drift that the Italian sexy comedy was taking was now excessive. He makes up for it with success on the radio and in the theatre. One of his best cinematic outings of the decade is in According to Pontius Pilate by Luigi Magni

Buzzanca experienced an artistic renaissance in the mid-Noughties. To give him new notoriety contributes the role of protagonist in the fiction My son

In 2007 he also received critical acclaim for his performance in the feature film The Viceroys by Roberto Faenza. Participation in the film will guarantee him the victory of a Golden Globe and a nomination for the David di Donatello as best leading actor

In 2017, Buzzanca and Carlo Delle Piane play an elderly homosexual couple in the touching film Who will save the roses?

Today, health problems have pushed Lando Buzzanca away from the scene. However, the actor remains one of the best-known faces of a particularly happy season for our cinema