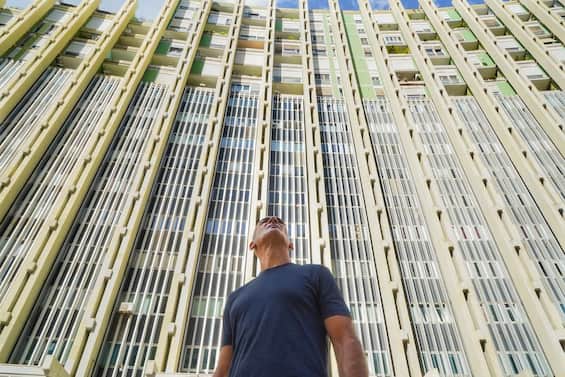 The doors of the Catanzaro prison open one morning on February 23, 2017. After a 21-year wait in an innocent cell. It’s cold that day, but after the hug with his wife, recovering his life takes the form of the sea. Cold and rough pebbles underfoot, a dip in the cold February water. That day Angelo Massaro goes back to living like this, diving into his sea. His human and judicial odyssey has now become the documentary film Dead weight, written by Benedetto Lattanzi and Valentino Maimone, founders of Erroriudicari.com, directed by Francesco del Grosso and of which Massaro himself is the protagonist. A physical and emotional journey through his history through the places that framed his unjust detention and the people who with him were more or less aware protagonists: first of all his wife, Patrizia, his children and friends, the chaplain, the psychologist and the director of one of the institutions where he was detained. And then again the cell mates and the university professors of the law faculty in which – during detention – Angelo had enrolled and who still call him today to bring his testimony to the students.

The arrest and trial

Massaro was arrested on May 15, 1996 for the murder and concealment of the body of a friend of his, Lorenzo Fersurella, killed in the province of Taranto in October 1995. We arrive at him on the basis of a statement by a collaborator of justice and above all of a telephone interception which, however, will later be discovered to have been misunderstood in the transcript. A week after the murder, intercepted in the context of another drug legal proceeding while he was talking to his wife, Massaro had in fact said: “Tengo stu muers”, which in the Taranto dialect meant a particularly cumbersome piece of machinery attached to the hook of his car and which Massaro was towing at that moment. However, that sentence was translated and transcribed as “I keep stu muert”, dead in fact, for the investigators the proof that it was Fersurella’s body. The final sentence to 24 years, which later became 30 for cumulative sentence with the other sentence for association aimed at drug dealing, arrived in 1997.

Thus began his odyssey in Italian prisons, first in Foggia, then in Carinola (Caserta), Taranto, Melfi and Catanzaro. Twenty-one years in a cell, away from his wife and two small children, during which Angelo begins to study his case, enrolls in the Faculty of Law obtaining excellent results, writes letters addressed to the Ministry of Justice, to the prison administration department , to the “Antigone” Association and to the “Bambini senza barre” Association. Above all, 21 years in which he won’t stop screaming his innocence and in which he won’t give up. After a long judicial battle, his case was reopened in 2015 when the Cassation accepted the request for a review of the trial. His lawyer Salvatore Maggio manages to demonstrate with new evidence that his client was in a different location from that of the murder of Fersurella and on 23 February 2017 the Court of Appeal of Catanzaro issues the acquittal sentence because the fact does not subsists. Angelo is free again. After 21 years behind bars.

“I’m still waiting for an apology from those who investigated me and those who sentenced me to 24 years in prison just for wiretapping the phone,” Massaro accuses today. “It is unacceptable to have a 21-year piece of life stolen without anyone ever paying for this colossal mistake.” Angelo Massaro has not yet been compensated by the State for the unjust detention suffered for 21 years.

In Italy today there is no real statistics on judicial errors, there is no archive at the Ministry of Justice and little and fragmentary information comes from that of the Economy. However, a reliable snapshot of the phenomenon is taken by the non-profit association Errorigiudiciari.com, which has been investigating the phenomenon in Italy for over 25 years. Based on the data they processed from 1991 to 31 December 2021, there were 30,231 cases considering those of unjust detention and acquittals following process revisions: on average, this means just over 975 a year. All of this – calculates Errorigioniari.com – for a total expenditure that is around 28 million 880 thousand euros every year. In 2021 alone, there were 565 unjust detentions, for a total expense of compensation for which the liquidation of 24,506,190 euros was ordered.