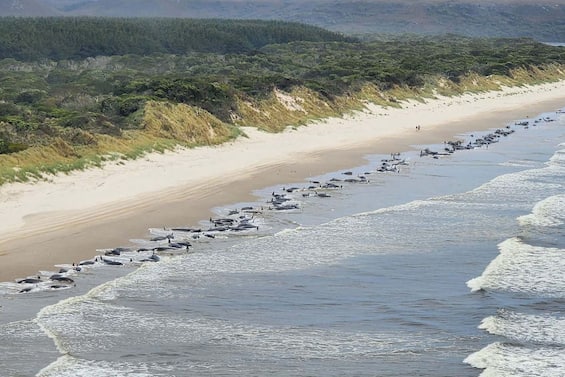 The toll of whales found dead in New Zealand rises. About 240 cetaceans are stranded on a beach off the Chatham Islands. A few days ago another 215 pilot whales, also called pilot whales, were stranded nearby, off the coast of the island of Rangiauria. The New Zealand Ministry of Conservation of Natural and Historical Heritage is investigating an inexplicable phenomenon for experts. Many of the marine mammals were already dead when they were discovered. “The surviving whales have been euthanized by the professional team to spare them further suffering,” local authorities told the press. Officials explained that it was not possible to bring the animals back into the water for fear of shark attacks.

The causes are unknown

Experts are unable to explain the causes of these strandings. Many marine mammals, including whales and dolphins, usually run aground off the coasts of South Australia and New Zealand but the reasons may be different: it is believed that these accidents may be caused by diseases, navigation errors, sudden changes in tide, pursuit by predators or extreme weather conditions.

Cetacean strandings are not uncommon in this archipelago. Way back in 1918, more than 1,000 animals died after being stranded in the area. Just over two weeks ago, around 200 pilot dolphins died on a beach in Tasmania, Australia. Researchers have suggested they could be caused by groups of cetaceans drifting away after feeding too close to shore. These pilot whales, which can measure up to six meters, being very sociable animals, can follow members of their group who are lost and in danger. In New Zealand, around 300 animals run aground each year according to official data.