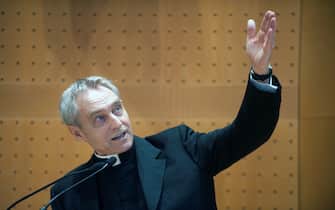 “I would not have thought that the last stretch of road from the Monastery at the gates of Heaven where is it Peter could be that long”. In this way, Benedict XVI wanted to greet those present at the ceremony for his own 95 years oldlast April, organized in Monaco, in the Sala Hubertus of the Palace of Nymphenburg. However, it was Monsignor who delivered the speech Georg Gansweinprefect of the papal household and private secretary of Benedict XVI until his last moments. Almost a son for the Pope Emeritus

WHO IS – Georg Gänswein was born in Germany on July 30, 1956in the town of Riedrn am Waldnear Freiburg, and was ordained a priest on May 31, 1984. The transfer to the Vatican took place in the middle of the s Ninetyat the invitation of the then Cardinal Prefect of the Congregation for the Doctrine of the Faith Joseph Ratzinger. Gänswein was a professor of canon law at the Pontifical for a long time University of the Holy Cross (Opus Dei) in Rome

THE ROLE OF SPECIAL SECRETARY – Gänswein was appointed in 2003 Cardinal Ratzinger’s secretary: he will stay there for almost twenty years, becoming his right arm in the last two years at the former Sant’Uffizio and, subsequently, during the Pontificate and in the approximately ten years since Pope Emeritus. Only in recent years has he focused exclusively on Benedict XVI, after having held the double role of secretary of the Pope Emeritus and assistant of Pope Francisas prefect of the papal household

Pope Ratzinger is dead, goodbye to Benedict XVI: he was 95 years old

SIMILARITIES AND PASSIONS – In April 2005don Ganswein he immediately made a splash with his good looks. He was dubbed “the George Clooney of the Vatican” and compared to Father Ralph of “The Thorn Birds”. Donatella Versace dedicated a men’s collection to him, websites and fan clubs were born on Facebook. He played soccer and he was a ski instructor a passion, this one, that he has not abandoned, even today that he is in the Vatican. On Tuesdays, the Pope’s assistant’s day off, he often went skiing at the Terminilloaccompanied from some longtime friends

Pope Ratzinger dead, the testament: “Remain firm in the faith”

THE TIME OF WITHDRAWAL – During these years Ganswein he never shied away from questions from the media, who repeatedly asked him about the state of health of Benedict XVI. One of the most touching memories was that of his resignation: “From February 28, 2013, Benedict XVI resigned from the ministry of Bishop of Rome. The decision was so serious that at that moment I had imagined a life expectancy of the Pope Emeritus of no more than a year. When we left together the Apostolic Palacethe whole world witnessed how I can’t hold back the tears”

Pope Francis: “Moved and grateful to have had Benedict XVI”

THE MORNING OF PRAYER OF THE POPE EMERITUS – “How is the daily life of the Pope Emeritus Benedict XVI at 95 years old?” is one of the questions often asked of Gänswein. He himself said that the day began with the Holy Massin which the monsignor himself was generally the principal celebrant, with the presence of Benedict XVI. The two also acted together Liturgy of the Hours, and then they had breakfast. Benedict XVI then dedicated himself to readingto answer correspondence and to get information on events in the Church and in the world

Death of Ratzinger, 60 thousand people expected at the funeral in St. Peter’s

AFTERNOON AND EVENING – Always as he said Archbishop Gänswein, just before lunch the two recited another part of the Liturgy of the Hours, and after the meal, Pope Benedict rested. During the afternoon, Blessed he read or asked someone to read for him. At the end of the afternoon he was walking on the electric wheelchair in the Vatican Gardens while reciting the Rosary. Dinner is served early, and then the Pope Emeritus watched the Italian television news and concluded the day by reciting Compline

THE ONLY TWO ESCAPE FROM THE VATICAN – Monsignor Ganswein was next to Pope Emeritus even during his only two outings from the Vatican during these ten years of retreat: the first was for a day’s vacation at Castel Gandolfo, at the urgent invitation of Pope francescoand the second to travel to Germany in July 2021, to rush to the bedside of his brother Georg, expired that year

THE ACCUSATIONS – Monsignor Gänswein was often in the presence of Benedict XVI in the world and it was he, in fact, who commented on the allegations of omitted check on a pedophile priest coming from Germanyduring the period in which Ratzinger had been bishop of Munich. Very serious accusation, formulated moreover by a Report of a diocesan commission and resolutely rejected to the sender by Gansweinwho claimed how the Pope Emeritus was ready to face the judgment of a German Civil Court, renouncing any form of immunity or prescription

AND NOW? – His role as prefect of the Papal Household had been “hibernated” in 2020: also to better follow Benedict XVI, Pope Francis decided to leave it in place but to leave him indefinitely. Now that Benedict XVI is gone, it will be up to Francis to decide which role to assign to Monsignor Gänswein

Farewell to Pope Ratzinger, reactions from all over the world