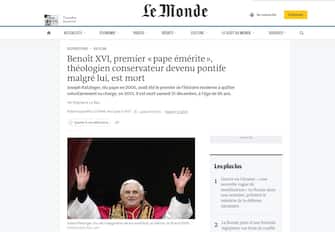 “He will go down in the history of the papacy as one of the most daring pontiffs of the contemporary age. The resignation of this solitary and reserved man, announced in Latin on 11 February 2013, had stunned the Church and the world”: thus writes the website of the French newspaper Le Monde remembering Joseph Ratzinger, Pope Emeritus who died on December 31, 2022, at the age of 95

“The theological marvel before his final judge” is the headline on the German site Der Spiegel. The article reads: “With his resignation, Pope Benedict became the hero of the retreat. But he did not remain hidden from the world. And so his last years also became an escape from the truth”

Pope Ratzinger is dead, goodbye to Benedict XVI: he was 95 years old

The former head of the Catholic Church resigned as pope in February 2013, “the first pope to retire in 600 years” reports the Briton The Sunwho also recalls that “Benedict has become increasingly frail in recent years as he devoted his post-papatiate life to prayer and meditation”

Farewell to Pope Ratzinger, he was 95 years old. The body on Monday in St. Peter’s. LIVE

Extensive coverage of the news by the New York Times who writes of Ratzinger: “long before he was Pope, the blessed man was a central figure in the Roman Catholic Church. He astounded the world”

“An intellectual giant and a rock of moral certainty who had spent a lifetime defending the faith against outside forces, Pope Benedict would eventually see his tenure as pope undone in large part by internal rot,” writes the Washington Post

Benedict XVI, when Pope Ratzinger announced his resignation in 2013. VIDEO

“Benedict XVI has died at his Vatican residence, aged 95, nearly a decade after he resigned due to ill health. He led the Catholic Church for less than eight years until, in 2013, he became the first pope to resign from the time of Gregory XII in 1415”. So writes the site of the BBC

Joseph Ratzinger: the story of Benedict XVI, the Pope Emeritus who resigned. PHOTO

The Guardian: “Benedict XVI’s death closes an unprecedented period in recent history in which two popes have coexisted, a situation that has caused tensions within rival camps at the Vatican. The former pope remained a powerful conservative influence and a point reference for opponents of Francis’ efforts to reform the church and redirect it to serve the poor”

Ratzinger, from classical music to cats: the passions of the Pope Emeritus who died at the age of 95

Le Figaro gives ample space to issues related to the legacy of Benedict XVI, “a legacy that will be both spiritual and intellectual” and remembers him as “one of the greatest theologians of his time”

“The Pope who went away twice” writes the Spanish site El Paìsadding that “the new pope was German – the first in history and the second non-Italian since the 16th century – and had a reputation for being a conservative. Also for being an extraordinary theologian, but a bit rigid and orthodox. A perfect profile for a pope transitional”

“Benedict XVI has died: the guardian of orthodoxy who fought in the Second World War”. This is how the Argentine site remembers it Clarin which he then writes: “He was a historical character of the Church, a great theologian, who was at the forefront of the top for 40 years. Full of ailments but with a clear mind”

The Brazilian Globe: “Although the most striking gesture of his pontificate was his resignation, his nearly eight years at the helm of the Catholic Church have also been marked by strong theological texts, a conservative line on moral issues, scandals of political disputes and leaks of Vatican documents ”