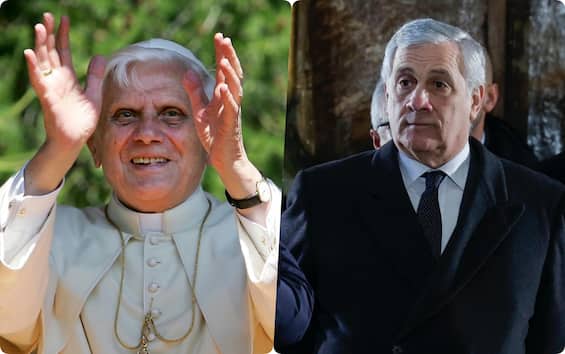 “The commitment of Benedict XVI, as well as that of John Paul II, for a Europe united from a cultural point of view and not only from the common market will remain forever”. This is the memory that Foreign Minister Antonio Tajani reported to Sky TG24 regarding Pope Emeritus Benedict XVI, who died on 31 December 2022 (LIVE UPDATES – PHOTOSTORY). “He was a convinced pro-European and I think he is also a real cultural reference, especially for the family of the European People’s Party. The void that he leaves is enormous, but his writings and his thoughts will remain in the history of our Continent ”, declared Tajani (ALL VIDEO-THE SPECIAL).

The foreign minister also recalled the first time he met him. “I remember, he was still a cardinal and it was during a mass in the cathedral of Sant’Aurea in Ostia, which he himself presided over. He gave a beautiful homily on the Christian roots of Europe and when I went to greet him in the sacristy he said: ‘Don’t you need to introduce yourself, I know who you are”. I saw him again when he became Pope, I greeted him and he said again: “I remember you, there is no need for you to introduce yourself”. For my part, therefore, there is deep affection”. Furthermore, as Tajani recounts, “a few days ago I received at the ministry one of his books that I had presented at the Catholic University of Milan. He learned about it and sent it to me with his dedication ” .

The opinion on Benedict XVI

“Many have not understood it. Even the famous Regensburg speech was misinterpreted, he was not an enemy of anyone, least of all of Islam”, highlighted Tajani. Many, however, seem to have changed their minds about the figure of Benedict XVI. “What happened this morning really struck me”, highlighted Tajani, “when I heard people in the street saying that perhaps Pope Benedict XVI was not sufficiently understood. And above all the greatness of him I think has not been understood ”.

According to Tajani, it was above all his travels that spoke of Pope Ratzinger’s foreign policy. “He started from the Christian roots of Europe and from there he dialogued with everyone, looking at the whole world and reasoning with different realities. After all, only by having a certain identity can one speak with others, without fearing anything. Thus one can never be afraid of confrontation with others: it is enough to recall the meetings of Benedict XVI with the chief rabbi of Rome”. Finally, Tajani does not forget the dialogue that took place with the Italian government. “The relationship with the center-right majority was always very profitable. Silvio Berlusconi, being a believer, has always shown profound respect for the figure of Benedict XVI”.