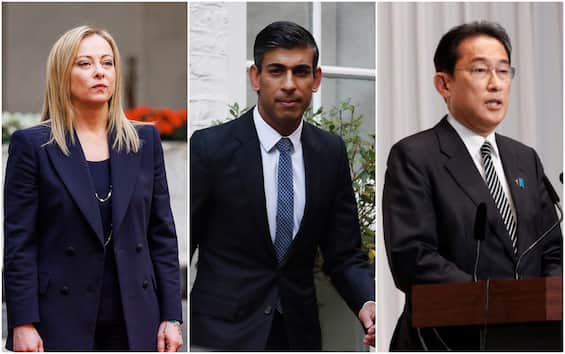 Italy, the United Kingdom and Japan have formed an “unprecedented” alliance in the defense sector for the development and construction of the fighter of the future, a sixth generation supersonic jet intended to replace the current Eurofighter Typhoon (the fruit collaboration between Italy, the United Kingdom, Germany and Spain). The new fighter aircraft will be called the Tempest and is expected to be operational in 2035, with development starting in 2024. “As leaders of Italy, Japan and the United Kingdom, we are committed to supporting the rules-based international order, free and open, which is more important than ever at a time when these principles are contested and threats and aggressions are on the rise,” Prime Minister Giorgia Meloni, British Prime Minister Rishi Sunak and Japanese Prime Minister Fumio said in a joint statement. Kishida.

“As the defense of our democracy, our economy and our security and the protection of regional stability are increasingly important, we need strong defense and security partnerships, supported and strengthened by a credible deterrence capacity” – it reads in the communiqué – Our three nations have a close and long-standing relationship based on shared values ​​of freedom, democracy, human rights and the rule of law. Today we are taking the next step in strengthening our trilateral partnership. We announce the Global Combat Air Program (GCAP), an ambitious plan to develop a next-generation combat aircraft by 2035.”

“The program will produce economic and industrial benefits”

“Through the GCAP, we will build on our long-standing defense relationship. The GCAP will accelerate our advanced military capability and technological edge. It will deepen defense cooperation, scientific and technological collaboration, supply chains integrated and will further strengthen our defense industrial base – underline the leaders of the three countries – This program will produce broader economic and industrial benefits, supporting employment and livelihoods in Italy, Japan and the United Kingdom. It will attract investment in research and development in digital design and advanced manufacturing processes.It will provide opportunities for our next generation of highly skilled engineers and technicians.”

“A Milestone of Global Security”

“Working together in a spirit of equal partnership, we share the costs and benefits of this investment in our people and technologies. Importantly, the program will support the sovereign ability of all three countries to design, supply and upgrade state-of-the-art combat air capabilities, well into the future. This program has been designed with our allies and partner. Future interoperability with the United States, NATO and our partners in Europe, the Indo-Pacific and globally is reflected in the name we have chosen for our program”. “This concept will be at the heart of its development – conclude the leaders – We share the ambition that this aircraft will be the fulcrum of a wider combat air system that will work in multiple areas. It is our hope that the Global Combat Air Programme, and through it our partnership of capabilities, will be a cornerstone of global security, stability and prosperity in the coming decades.”

Sunak: “We must overcome and defeat those who try to harm us”

“The security of the UK, both today and for generations to come, will always be of paramount importance to this Government. That is why we must remain at the forefront of advances in defense technology, overcoming and defeating those who seek to harm us.” “, said the British premier, Rishi Sunak, commenting on the historic collaboration agreement between Italy, the United Kingdom and Japan.

The strategic partner of the GCAP program is Leonardo, as announced by the group itself in a note. The Gcap will involve the entire Italian supply chain starting from universities and research centers up to SMEs and the leading national industries involved. In particular, Italy, the UK and Japan – through their respective national industries, Leonardo, Bae Systems and Mitsubishi Heavy Industries – will collaborate in the development of technologies for the sixth generation aerial platform, from a system of systems perspective. The Italian team, in addition to Leonardo – already present in the program since 2018 with Leonardo UK – will involve Avio Aero, Elettronica and Mbda Italia together with the entire innovative and productive ecosystem of the country.