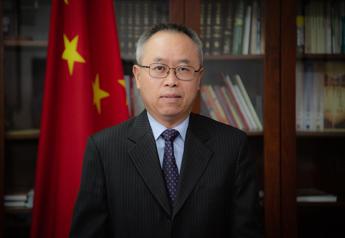 Exclusive speech for Li Junhua’s Adnkronos: “Democracy, a common value for all humanity”

The “Democracy Summit” convened by Joe Biden for December 9 and 10 is “a pretext to foment a confrontation between factions, we strongly oppose these attempts to divide the international community and to ‘privatize democracy’, it is extremely it is undemocratic to try to contain other nations by exploiting democracy “. The Chinese ambassador in Rome Li Junhua writes this in an exclusive speech for Adnkronos, denouncing the “bullying” of the States, “contrary to the very sense of democracy”.

“For some time now, China has been labeled as an ‘undemocratic’ country. This derives from a misinterpretation of the concept of democracy, but above all from a misunderstanding of Chinese democracy. Democracy is a common value. to all humanity and a fundamental concept that the Communist Party of China and the Chinese people have always supported, “argues Li, recalling that” last month, during the sixth plenary session of the 19th Central Committee of the CCP, a communiqué underlining China’s efforts in developing a process of popular democratization and in promoting the institutionalization, standardization and proceduralization of a socialist democracy “.

“Democracy is not a decorative ornament, but a guarantee of the sovereignty of the people. The main goal of the CCP has always been the well-being of the people and the rejuvenation of the nation. The institutional protection of the interests of the majority of the Chinese population is ensured by the system of People’s Congresses, multi-party cooperation, political consultation under the leadership of the CCP and the system of regional autonomy, which guarantee the full participation of citizens in the government of the country. For example – underlines in the intervention entitled “Democracy, a value common to all humanity – The National People’s Congress is made up of five levels, each of which is appointed through direct or indirect elections. Another example, in the formulation of the 14th five-year plan, the central government consulted the entire population through online feedback, collecting and incorporating over a thousand suggestions “.

“Democracy is not a mass-produced product, but an exploration that can be modeled according to the conditions of a country. The type of political system that a country adopts, the development path it undertakes and the form of democracy it implements are determined from its history and its culture, the nature of its society and its level of economic development – writes the ambassador – Therefore, there cannot be a single approach to democracy: it can be achieved in many different ways. Whether a country is democratic or not is up to its people alone. In May of this year, a survey by the Washington Post revealed that 98% of Chinese citizens are satisfied with their government: a figure that can only reflect the affirmation of enjoyment of the democratic rights of the Chinese people. The process of people’s democratization of China made it possible for the country to focus all its efforts on the most relevant issues, promu o to continuously improve the quality of life of the population and to safeguard the sovereignty, security and development interests of the nation “.

“Democracy must express itself not only in domestic politics, but also in international relations. The United Nations is made up of more than one hundred and ninety sovereign states. It is the proper sense of democracy that a nation’s affairs are the responsibility of its people and that those internationals are negotiated between different countries. Although each nation has a unique condition, all peoples are united in pursuing the values ​​of peace, development, equity, justice, democracy and freedom. No country can be considered the undisputed leader of democracy – he says There- no model is to be considered superior. The presence of one or a few countries that dictate the rules through power policies and attitudes of international “bullying” is totally contrary to the very sense of democracy. The right democratic model provides that business are managed by individual countries in accordance with international standards and with common consent “.

“In the next few days, the United States will organize the so-called” Summit for Democracy “, which has actually proved to be a pretext to draw ideological lines, implement blockade policies and foment a confrontation between factions. This reflects US membership. to the mentality of the cold war and the zero-sum game, harshly criticized and questioned by numerous experts worldwide – denounces the ambassador again in the intervention for Adnkronos – We strongly oppose these attempts to divide the international community and to “privatize democracy.” The United States should pay more attention to the needs of the American people and address and resolve its own democratic and human rights deficit. Indeed, it is extremely undemocratic to attempt to contain other nations by claiming to be the “master of democracy”, holding “double standards” and even exploiting democracy “.

“China – concludes Li – will continue to strive to achieve peace, contribute to global development and defend the international order; it will continue to develop popular democratization and will contribute, through its wisdom, to the progress of human political civilization; it will also continue to cooperate with other countries and peoples to promote common values ​​for all humanity, to promote the democratization of international relations and contribute to global peace and prosperity “.