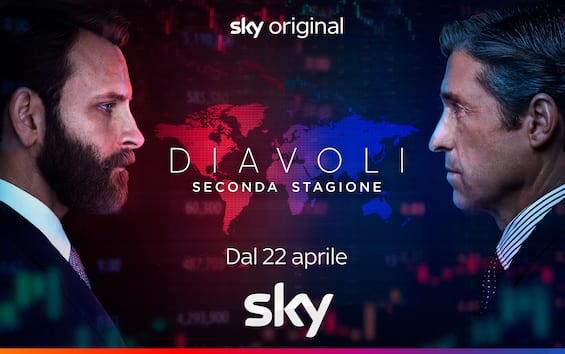 Devilswhere and when to see the TV series

On Sky Atlantic is coming the second season of Devils, the series with Patrick Dempsey and Alessandro Borghi, for a total of 8 episodes and 4 weeks of airing starting from 22 April. Obviously Devils, a Sky original production, will also be available On Demand and streamed on NOW TV. Below is the calendar of appointments:

Devilsthat’s what the second season is about

2016, Brexit is upon us and Trump is fighting fiercely to be elected president of the United States of America. Four years have passed since Massimo Ruggero managed to thwart Dominic Morgan’s plan against the euro and despite the high personal price paid, Massimo decided to remain CEO of NYL. Increasingly questioned by the board, Massimo has decided to undertake a policy of pro-Chinese acquisitions, bringing in new investors and team members from China. But it is his old mentor Dominic Morgan who reappears and warns him: the new Chinese partners are ready to betray him to pursue a silent war between China and the US for the technological control of the data of millions of people. Massimo must team up with Dominic if he wants to fight on the right side. Who does Massimo have to believe? A question that between social platforms, Bitcoin and 5G will bring him up to 2020: in the midst of the global pandemic, Massimo will finally have to choose which side to take.

In addition to the two protagonists, Alessandro Borghi in the role of Massimo Ruggero, in the finale of last season appointed CEO of the New York-London Investment Bank, and Patrick Dempsey in those of Dominic Morgan, one of the most influential man in world finance, also return to the cast Malachi Kirby (The Race – Corsa mortale, Radici), Pia Mechler (Everything Is Wonderful), Paul Chowdhry (Live at the Apollo, Swinging with the Finkels), in the role of the Pirates, the team of traders very loyal to Massimo Ruggero, and Lars Mikkelsen (The Killing, Sherlock, House of Cards), again in the role of Daniel Duval, the founder of Subterranea.

Alongside them, in the cast of the new episodes also Li Jun Li (Damages, Minority Report, Wu Assassins) in the role of Wu Zhi, NYL’s new Head of Trading, Joel de la Fuente (Law & Order, The Man in the High Castle ) as Cheng Liwei, new board member, and Clara Rosager (The Rain, The competition), who in the series will play Nadya Wojcik, Dominic’s new genius protégé.

The new episodes are directed by Nick Hurran (Sherlock, Doctor Who, Fortitude, Altered Carbon) and Jan Maria Michelini (I Medici, DOC- In your hands, Blanca). The series is written by Frank Spotnitz (Leonardo, Medici, The X-Files, The Man in the High Castle) and James Dormer (Strike Back, Medici), with Naomi Gibney and Caroline Henry.