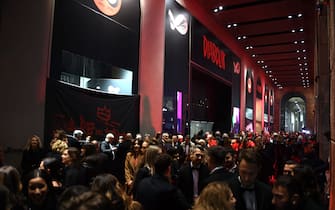 “Shot at the Rinascente“. This is the title of the original event that was held on the evening of November 3 in Milan for celebrate 60 years of Diabolik

WATCH THE VIDEO: Diabolik: shot at the Rinascente, the surprise party

Two actors-acrobatsdisguised as the character of the Italian noir comic and his famous partner Eva Kant, they dropped along the front of the shop

Diabolik, shot at the Rinascente: the surprise party in Milan to celebrate 60 years

The event was organized on the occasion of the launch of the collector’s publishing project with which La Rinascente celebrates Diabolik’s 60th anniversarywhich arrived on newsstands in November 1962, thanks to the sisters Angela and Luciana Giussani

In his new adventure, Diabolik impersonates the CEO of Rinascente and wants to sneak into the Milan department store to be able to rob the vault

Diabolik – Ginko Attack !, the trailer for the new film to be released in November

“I have been a fan of Diabolik since I was a boy and, with the 60th anniversary of its first release approaching, we decided to contact the Astorina editorial staff” to “organize this birthday in a symbolic place of Milan such as Rinascente in Piazza Duomo” , said the real CEO, Pierluigi Cocchini

Diabolik – Ginko on the attack: the first teaser reveals the look of the protagonists of the sequel

“Probably when the Giussani sisters created Diabolik, in 1962, they would never have imagined that today we would have celebrated his sixtieth birthday. But, being a DOC Milanese, they would certainly have appreciated that the celebrations were celebrated in an emblematic place of their city. Like Rinascente “, instead said the director of the Astorina publishing house, Mario Gomboli

Diabolik, everything you need to know about the film

For the launch of the illustrated register, in 365 thousand copies, the cast of Diabolik – Ginko on the attack!, the new film by Manetti bros. with Giacomo Gianniotti and Miriam Leone

Miriam Leone transformist, all the looks: from Miss Italy to Diabolik

Miriam Leone at the event

The look chosen by Melissa Satta

Marco and Antonio Manettiwho directed the 2021 film and sequel

Beppe Sala, mayor of Milan, was also present at the event. The collection of the 900 issues of Diabolik released in the last 60 years was exhibited in the 8 external windows of the Rinascente, flanked by images of the protagonists of the comic. Comic that also arrives on Audible as an audio series with Francesco Venditti in the role of Diabolik and Myriam Catania in that of Eva Kant

Diabolik 2, comes the sequel of the Manetti Bros. The poster of the film