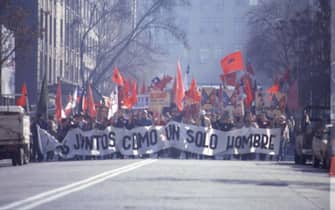 Augusto Pinochet he died on December 10, 2006. Since 1973, when he proclaimed himself president of Chile after a coup d’etat, in 1990, the general imposed a military dictatorship on the country which has been featured in numerous films. From The house of the spirits to Machuca, the films to find out what happened in those years (in the photo: a scene from Machuca)

The house of the spirits is a 1993 film, based on the novel of the same name by Isabel Allende, nephew of the former Chilean president Salvador Allende. With a spectacular cast consisting of Meryl Streep, Jeremy Irons, Glenn Close, Winona Ryder, Antonio Banderas and Vanessa Redgrave, it traces the period of social transformations from the 1920s to the 1973 coup.

The film tells the story of a Chilean upper middle class family who clashes with the government of Pinochet. During the coup, the daughter of the head of the family, Blanca, is arrested and suffers violence and torture

Cologne, Emma Watson and the dark years of the Pinochet regime

The postman was the last interpretation of the Neapolitan actor Massimo Troisi. The film is inspired by the novel Neruda’s postman, by the Chilean writer Antonio Skarmeta

The film narrates the exile of the great poet Neruda, that receives political asylum from an island in Southern Italy where he forms a friendship with the postman who delivers the letters from Chile

Tony Manero is a 2008 film, winner of the award for best film and best actor (to Alfredo Castro) at the Turin Film Festival. It is set in Santiago de Chile in 1979 where the events of the protagonist Raul Peralta are intertwined with the social situation of the dictatorship

Salvador Allende is a 2004 documentary film based on films of the time and some interviews with people who had known the Chilean president Salvador Allende, killed during the Pinochet coup in 1973

Machuca is one of the most famous Chilean films internationally: it is set in 1973 in Chile before and during the coup. The film tells the story of two eleven-year-old boys: Gonzalo Infante and Pedro Machuca, the first from a wealthy family, the second from the slums on the outskirts of the city. They meet at school, but when a series of problems raises the issue of integration, the first conflicts arise with the richest pupils who tend to marginalize the poorest

Island 10 is a 2009 film that tells of Salvador Allende’s closest collaborators and ministers who, after the coup, are locked up in the concentration camp of Dawson Island

Post Mortem is a 2010 film that tells of the search for Mario who, during the Chilean coup, tries to find out what happened to his neighbor Nancy, a cabaret dancer who has mysteriously disappeared

No – Days of the Rainbow is the film adaptation of the play El Plebiscito by Antonio Skarmeta. The protagonist is René Saavedra, played by Gael Garcia Bernal, a brash advertiser convinced by Pinochet’s opponents to lead the campaign to ask for a referendum on his presidency

The film is set in Chile of 1988 when, after fifteen years of dictatorship, Augusto Pinochet, faced with international pressure, is forced to call the referendum. The “No” advertising campaign takes place over 27 nights, in which each faction has 15 minutes to perform their commercial

Colony is a historical thriller, starring Emma Watson, Daniel Brühl and Michael Nyqvist. The film starts from kidnapping of a young German by Pinochet’s military during the 1973 Chilean revolution

The young German’s girlfriend initiates a desperate search until it is discovered that the boy is locked up in the infamous Colonia Dignidad, where there is a sort of sect from which no one has ever managed to get out