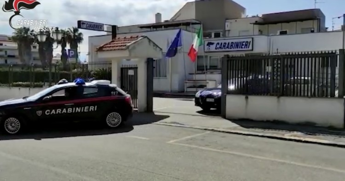 Thanks to the help of a whistleblower, the Carabinieri of Messina managed to shed light on a corruption ring between agents of the local police of Leotojanni and some entrepreneurs. During the night, the Carabinieri of the Provincial Command of Messina executed a precautionary custody order issued by the Gip at the Messina Court at the request of the Public Prosecutor’s Office, against 7 people for whom, in the current phase of the procedure, serious indications of guilt emerged for the crimes – for various reasons – of criminal association aimed at committing crimes against the public administration, against public faith and against property. The seizure of a limited liability company dedicated to the restoration of roads following accidents with damage to the carriageway or spills of liquids or other debris was also ordered.

The investigation, conducted by the Carabinieri of the Company of Taormina, coordinated by the Public Prosecutor of Messina, hit a criminal association operating in the Ionian belt of the Province of Messina which, “through a proven system of corruption between public officials (personnel in force to the municipal police of the Municipality of Letojanni and the Metropolitan Police of Messina) and entrepreneurs, illegally managed the service of securing the road system following accidents, allowing undue enrichment not only of the owner of the seized company, which had acquired a monopoly in the sector, but also of two of the public officials under investigation. The latter, in fact, through a mechanism that saw the involvement of a company created ad hoc and linked to them, would have obtained hefty earnings as consideration for the enslavement of their public function to private interests “.

The investigative activity was started following the anomalies found by the Carabinieri station of Mongiuffi Melia in the procedures for restoring the conditions of the roadway on the occasion of an autonomous road accident, with consequent loss of diesel from the vehicle involved, which occurred in the inhabited center of the municipality of Mongiuffi – Melia in January 2019. Arousing the suspicion of the Arma soldiers was the intervention, “irrational” in that circumstance, of a patrol of the municipal police of the neighboring municipality of Letojanni, not competent for the territory. Starting from this, the soldiers of the Arma, through documentary acquisitions and “thanks to an important coordination action of the Carabinieri Stations present in the area, realized that in most of the accidents with spills of liquids or debris on the road surface , which occurred on the roads of the municipality of Letojanni (or some neighboring municipalities), as well as on the provincial arteries, the company identified for the restoration of the carriageway was in most cases the SOS Strade SRL “.

Another significant fact that aroused the attention of the investigators emerged from the acquisition of the intervention cards of the aforementioned company, from whose analysis it was found that in most of the claims managed by SOS Strade, to intervene on the sites, as exponents of the police, were always two members of the municipal police of Letojanni. “Fundamental to having a unitary interpretation of the irregularities found, was the application in the development of the investigation by the investigators of the national anti-corruption legislation provided for by the Consolidated Law on Public Employment in the criminal trial) which provides for and protects the whistleblower, that is the person who also confidentially reports a crime, which has made it possible to confidentially acquire, in the preliminary phase, the statements made by a public employee about the functioning of the lucrative system for the restoration of municipal roads “, say the Carabinieri.

The national legislation on whistleblowing, in fact, not only provides that public employees who, in the interest of the integrity of the public administration, report to the judicial authorities illegal conduct of which they have become aware due to their employment relationship, cannot be sanctioned, demoted, fired, transferred, or subjected to any other organizational measure having direct or indirect negative effects on the working conditions determined by the report, but also establishes that the identity of the whistleblower may not be detected until the conclusion of the investigations. Precisely the implementation of the specific sector regulations has therefore made it possible to acquire the declarations made in a genuine way by the source to confirm the first evidential evidence collected by the Arma soldiers and to start targeted and more in-depth investigations.

The investigations made it possible to ascertain that the reason for which, in the event of accidents with damage to the carriageway or liquid spills, the cleaning and restoration of the streets of the Municipality of Letojanni was systematically entrusted, even in the absence of a tender or an agreement, the SOS Strade, was attributable above all to the privileged relationship that bound the owner of this company to two representatives of the local police of Letojanni. In fact, “the investigative investigations made it possible to reveal that SOS Strade, in order to obtain the recovery of the costs of intervention from the respective insurance companies of the drivers of the accident vehicles, had delegated another company to act in its name, based in Santa Teresa di Riva, the ELTA Service, whose shares were divided respectively between the daughter and the wife of the two exponents of the municipal police of Letojanni “.

Precisely by virtue of this bond of co-interest between the companies, the public officials, even carrying out acts contrary to their office, did their best to entrust the carriageway cleaning work directly to SOS Strade, allowing them to have a substantial monopoly in road repair and reclamation service in the Letojanni area. This mechanism essentially allowed public officials, through the ad hoc screening company (the ELTA Service), to obtain as many more revenues as were the claims for which SOS Strade intervened: a greater number of interventions on the road corresponded a greater number of settlement procedures to be managed and consequently a greater collection for the company in charge of debt collection.

SOS Strade, as the material executor of the road restoration works, in turn made use of another satellite company, attributable to one of the entrepreneurs affected by the restrictive measure, with which it was linked by a franchising contract. This satellite company, in the context of the same criminal plan, drew as a further benefit from the privileged relationship that linked SOS Strade to the local police of the Municipality of Letojanni, that of obtaining also the direct assignment of the removal services of vehicles on the road for the Municipality of Letojanni, without public tender or convention.

The investigations “made it possible to ascertain that the corruption mechanism concerned not only the restoration interventions of the municipal roads, but also of the provincial roads, with the involvement in the same association of the head of the Messina Metropolitan Police. The latter, as public official (Director of the Office), would have worked to allow SOS Strade to have a monopoly in the service of restoring roadways in the territory of the Metropolitan city of Messina, helping to assign the interventions for the restoration of the roads to the company under investigation – by direct call – taking action to obtain in favor of this company the data and documents necessary to allow the recovery of the remuneration for the various interventions, as well as drafting false intervention forms to allow the settlement of intervention costs, in exchange for various benefits , consisting of small gifts (such as a coffee machine, a cell phone ulare and office furniture) and in the promise of hiring the daughter “.

During the operation, a local search decree was also carried out with contextual information of guarantee against a further 4 people (including the protemporary legal representative of the seized company), who are under investigation in a state of freedom for various reasons. for the same offenses. Among them is the de facto administrator of a company in the province of Cosenza who allegedly paid a check for over 2,000 euros in the form of a sponsor for a conference organized by the company ELTA Service, aimed instead at inducing the representatives of the local police of Letojanni to make themselves available to conclude illegal agreements for the supply of speed control devices for motor vehicles (speed cameras).

An employee of the Municipality of Santa Teresa di Riva and his son are also under investigation in a state of freedom, as the former would have revealed to the owner of the company under investigation confidential information on the tender in progress for the stipulation of the road restoration and reclamation agreement at the Municipality of S. Teresa, in exchange for hiring the son in black for about a year. The operation, conducted at the first light of dawn in the morning, involved over 100 Carabinieri of the Provincial Command of Messina, also employed in the provinces of Catania and Cosenza.