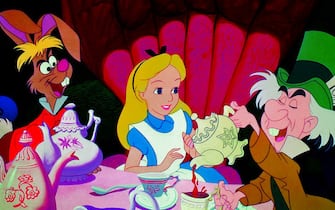 The first Disney movie to be made into a live-action movie was Alice in Wonderland. Behind the direction of Tim Burton, Mickey’s House has brought to the cinema the two novels by Lewis Carrol, Alice’s Adventures in Wonderland and Through the Looking Glass and What Alice Found There. The first chapter is dated 2010 while the second was released in May 2016, enjoying great success with the public

From the Simpsons to Snow White, what cartoon characters would be like if they were real

The story of Sleeping Beauty, on the other hand, has been revisited to tell that of Maleficent. The famous Disney villain, who bears the face of Angelina Jolie

From The Smurfs to Lady Oscar, the list of the most famous cartoons of the 80s

In 2017 the live action version of Beauty and the Beast arrived in cinemas: here is Belle in cartoon version and in her real counterpart, embodied by Emma Watson

Dan Stevens and Emma Watson in the live action version of Beauty and the Beast,

The Beast and Belle in cartoon version

74 years ago Bambi was released in Italy: curiosities about the film. PHOTO

Alice in flesh and blood in Alice in Wonderland, played by Mia Wasikowska

Lightyear, the trailer for the Pixar film

Elle Fanning is Aurora from Sleeping Beauty in Maleficent

Stella McCartney restores Minnie’s look and puts her pants on

In Maleficent it is the evil Maleficent, with the features of Angelina Jolie, who becomes the protagonist –

Percy Jackson and the Olympians will become a TV series

Mowgli, Baloo and Baghera in the animated film The Jungle Book

The jungle book, the characters yesterday and today

Baloo and Mowgli in the live action of The Jungle Book

The jungle book, the characters yesterday and today