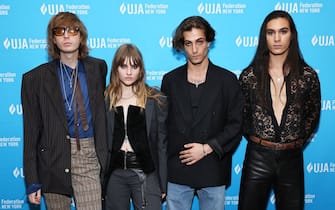 Maneskin – The band is back from a perfect 2021 with the victory in the Sanremo Festival and in the Eurovision Song Contest, which led them to perform all over the world. They were awarded as Character of the year

Gianmarco Saurino – The actor, who we have seen in successful TV series as DOC – In your hands And God help usis among the interpreters of Masculine singularawarded as Best Film. They collected the award along with him too Alessandro Guida And Mattia Pilatiother protagonists of the film

Tear along the edges, the voices of the characters in all languages ​​of the world. VIDEO

Giorgia Soleri – There is glory for the girlfriend of too Damianofrontman of the Maneskin, who won the recognition of Content Creator of the Year

Chiara Di Cristofaro – The journalist of Il Sole 24 Ore, together with Simona Rossittowere awarded for the Best Newspaper Article “Femicides and violence are increasing, what are we waiting for?”

Arianna Galati – The reporter won the award for the Best web press article up marieclaire.it “Michelle Wu, the first Boston mayor who went into politics to save her mother”

Yes – Cartoonist, whose real name is Simone Albrigi, won the recognition of Best digital product for “What is Schwa”

Idealist – Finally, the award for the Best Advertising Campaign goes to that of Idealist with Hi Dad!awarded by the president Francesca Vecchioni (in the photo)