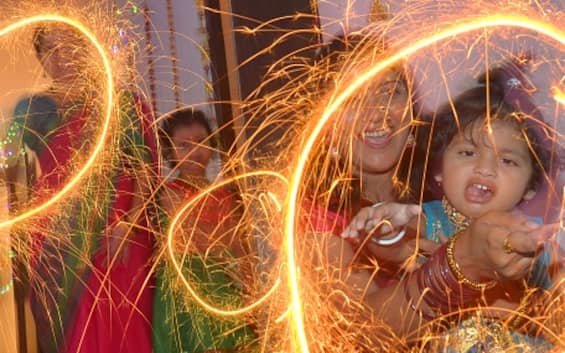 Good wins over evil. The light illuminates the darkness. In India Diwali or Dipavali is celebrated in this period, which means “row of lamps”. It is a Hindu festival also appreciated by non-Hindus for the suggestive atmosphere it manages to create. Celebrations and dazzling, colorful lights that illuminate houses and streets across the country to celebrate the “festival of light” which symbolizes the victory of justice.

Tradition makes the festival coincide with the return of the deity Lord Rama to the kingdom of Ayodhya after 14 years of exile. Diwali is also related to the worship of the goddess Lakshmi as the consort of Vishnu and a symbol of wealth and prosperity.

Diwali, is a national holiday throughout India which is celebrated by socializing and exchanging gifts with family and friends. Banquets set up with terracotta oil lamps and candles, fireworks that light up the sky at night, Hindu songs that brighten the evening.

Millions of Indians flock to colorful bazaars and markets for shopping. In the stalls you can buy flowers, lanterns and candles to decorate homes and offices. At sunset, over 1.5 million terracotta lamps are lit for 45 minutes at Ram Ki Paidi on the banks of the Saryu River in the northern city of Ayodhya, Uttar Pradesh. The Indian city maintains the Guinness Book of Records established last year with 900,000 oil lamps that have burned for the allotted time.

In recent years Diwali has been the focus of criticism and controversy for contributing to increased air pollution in India. Especially in the northern part of the country already hit by traffic smog. So much so that some Indian states, including the capital New Delhi, have banned the sale of fireworks at the festival of light.