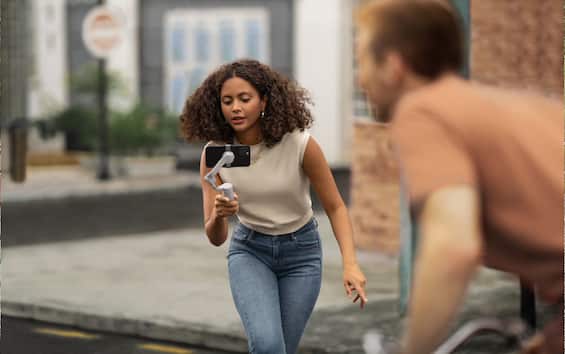 OM5 by DJI is a three-axis stabilizer, a so-called “gimbal”, robust, precise, light and at an attractive price capable of stabilizing the shots taken with the mobile phone, making them professional and “cinematic”. Waiting to try the new model released just these days, we tested it on both iPhone 13 Pro Max and Samsung Galaxy S22 Ultra and these are our impressions.

The main features and our horse test

OM5 has a smaller design than the previous model, is lighter and more compact and – new – integrates a durable telescopic arm that allows you to take group selfies from above or to record in tight spaces or difficult angles. The first element that “catches the eye” compared to previous models is that the gimbal is now able to support even large and heavy smartphones such as the iPhone 13 Pro Max or the Galaxy S22 Ultra without any problem. To test OM5 we reached the La Favorita riding club in Bicchignano nel Piacentino: the images shot by the jockey while leading the horse to the trot are ultra-stable, of cinematic quality, as if he were using professional equipment.

Through a lever it is possible to rotate and tilt the frame of the phone, then there are the buttons for capturing photos or videos and the multi-purpose button. OM5 is compatible for shooting in landscape or portrait mode and with a tripod. The stabilization is perfect, cinematic level thanks to its three axes, and the videos we shot are fluid, natural, even making sudden movements with the arm, with the smartphone always remaining in a stable position thanks to three powerful motors. The gimbal works best when connected to the DJI Mimo app via Bluetooth, which has many functions in its version for iOS (effects, possibility to change the frame rate and capture resolution), much less in the Android version. Good energy management (in our test we even got half a day of almost continuous use) even if unfortunately the battery is not replaceable and therefore, once exhausted, you have to wait a few hours for it to recharge. In our opinion, the ActiveTrack function has also been greatly improved, which keeps a subject we want to follow (an animal, a child, a racing car) always in the center of the frame and always in focus. Vloggers will benefit from the possibility of starting the recording with gestures, also present the functions of hyperlapse and timelapse while with Moonlapse (only for iOS users) you can automatically capture the movements of the Moon. Finally, thanks to the ShotGuides mode, the app is able to automatically recognize the surrounding environment providing useful tips for shooting.

Test widely passed for DJI OM5, which we have used in numerous and different situations, also to shoot videos for the reviews of our column. Inside the package there are a tripod, the charging cable, a purse and a wrist strap. Two colors (Athens Gray or Sunset White), DJI OM 5 is distributed in Italy by Nital and is sold at a competitive price in our opinion: 159 euros.