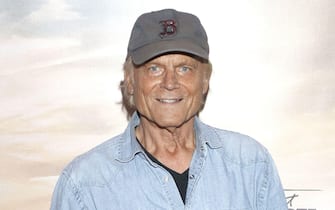 In Don Matteo 13a season consisting of 10 episodes broadcast on television for as many premieres until 2 June, Terence Hill will be present for four episodes before passing the lead role to Raoul Bova. In history, Don Matteo will celebrate forty years of priesthood

Raoul Bova this season he will make himself known to the public for the role of Don Massimo, a young priest who loves solitude and who will find it difficult to get in touch with the faithful of the new parish

Don Matteo, passing of the baton between Terence Hill and Raoul Bova: VIDEO

Don Matteo, the photo of the last take for Terence Hill

Flavio Insinna will still wear the uniform of his previous character, the Captain of the Carabinieri Flavio Anceschi, this season promoted to Colonel

Maria Chiara Giannetta returns to the screen to play his previous character, Captain Anna Olivieri, protagonist also in this season of a complicated dynamic with Marco Nardi

Who is Maria Chiara Giannetta: 21 curiosities about the actress

Maurizio Lastrico returns to interpret Marco Nardi, PM of Spoleto. After losing his chance with Anna, he is satisfied with the woman’s friendship just to be close to her

Giancarlo Magalli is one of the new entries of the new season. The famous presenter has been assigned the role of bishop who will welcome the perplexities of Don Matteo, victim of a spiritual crisis

Raoul Bova, from cinema to TV drama: his most famous films

Nathalie Guettahistorical face of the cast, returns to take on the role of Natalina Diotallevi, an indispensable element of the rectory

Francesco Scalione of the most loved characters by the public, will also be present in this new season in the role of Goofy

Pietro Pulcini returns in fiction with the role of Brigadier Pietro Ghisoni, historical face of the Gubbio and Spoleto barracks