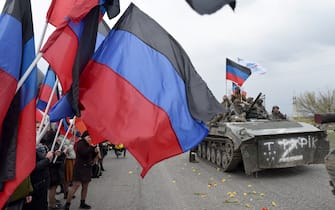 Almost two months after the start of the war in Ukrainethe efforts of Russian troops are aimed at “taking full control of the Donbass and southern Ukraine. “It had been talked about for some time, confirmed by the interim commander of the Russian Central Military District, Rustam Minnekayev. The goal is to obtain “the opening of a land corridor towards Crimea”, the peninsula on the Black Sea unilaterally annexed by Moscow in 2014

WATCH THE VIDEO: War in Ukraine, what are Moscow’s next targets

By conquering the Donbass, Putin would have power over the whole south-eastern area of ​​Ukraine, rich in raw materials and strategic due to its position on the sea. From the destroyed and now almost deserted city of Mariupol, one of the most important centers in the area, there are testimonies that speak of civilians “without water and without food”, As told by the director general of the Ukrainian Red Cross Maksym Dontsenko

Dontsenko, born in the town of Okhtyrka (Dumy region), says that the strategy of cutting off the supplies essential for the survival of civilians and the army has been going on for some time. It also happened in other areas of the country, such as Okhtyrka, where the Russians “also bombed the food stores”

Two Russian oligarchs and their families died: what we know

Meanwhile, the city of Mariupol has officially fallen into the hands of Moscow’s forces, as announced by the Russian Defense Minister Serghei Shoigu in a televised meeting with the Russian president Vladimir Putin

War in Ukraine, the “yellow” of the planes available to Kiev

The city is “liberated”Shoigu said. The only area that still resists is the Azovstal steel plant, occupied by hundreds of Ukrainian civilians and soldiers and surrounded by the forces of Moscow. The Kremlin’s plan is to ensure that the Azovstal site remains surrounded so that “a fly cannot pass”, as asked by Putin (in photo, mass graves in Mariupol)

The situation is no different in other parts of the country. Oleg Synegubovhead of the Region of Kharkiv – interviewed byUkraina Pravda – he told how the Russians would be leaving “starve“People, to then” play the part of good cops “and offer” a way out ”

Fabrizio Semprini, correspondent de The print in the Donbass, which a Sky TG24 confirmed as also Kharkiv is increasingly cut off from the rest of the region

The forces of Moscow, Semprini says, are replicating the strategy already held with Mariupolhitting the water and electricity supplies to wear out the inhabitants and force them to surrender