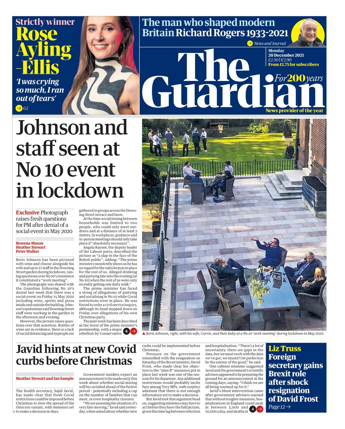 The image of the ‘scandal’ it did not portray a party in the gardens of Downing Street – with dangerous gatherings – but one “business meeting”. Thus the government spokesmen responded to the controversy aroused by the publication of a photo by the Guardian, which dates back to May 2020, during the first lockdown, when the strict anti-Covid rules were in force. They appear in the image Boris Johnson and wife Carrie in the private garden of the Downing Street mansion, with 17 staff members of the premier and a conspicuous supply of bottles of wine and cheese platters.

“Business meetings often take place in Downing Sreet garden during the summer months”, was the justification. Furthermore, it was recalled that “Downing Street is also the prime minister’s residence, as well as his place of work. The prime minister’s wife lives there and she also legitimately uses the garden.”

The controversy is only the latest in chronological order, after an embarrassing series of revelations that would show how the rules of social distancing were taken lightly or openly violated by the government staff and the entourage of the premier. And yet, it should be noted that at the time the image was taken, gatherings of more than two people were prohibited in public places, but not in public places. private gardens, which is Downing Street. Furthermore, it was allowed to leave one’s home for work reasons.

Nonetheless, the opposition has once again returned to the attack, to ask Johnson for clarification. Deputy Labor leader Angela Rayner urged the premier to “tell the truth” about the gatherings that took place in Downing Street, while the deputy leader of the Scottish National Party, Kirsten Oswald, called for the initiation of “an investigation conducted by a judge” to ascertain what happened.