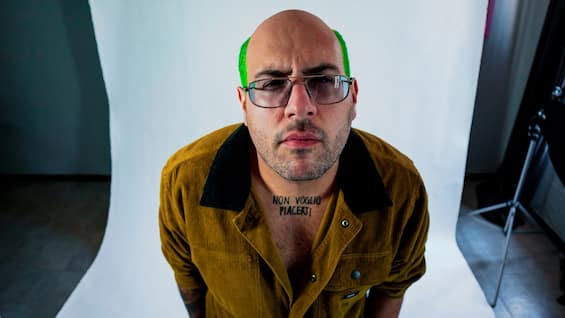 My name is Francesco, aka Dr. Wesh, and I have deeply hated myself for 28 years. The sense of inadequacy, self-criticism and hitting me have always accompanied me since I can remember, and perhaps I started making music just to escape from this pain, to exorcise it. The term “sono cringe”, for those who do not know much contemporary language, means “I am embarrassing”. The story behind this song is surreal, and it came to me after a session from my therapist. In a psychedelic journey I relived this trauma of several years ago in which I was dating this girl and I was in love with her, she was completely indifferent, and I felt embarrassing, useless, cringe in fact. This deep pain had to come out so much that I had to write this piece in seas of tears, to exorcise the pain.

At a certain point, after the song literally came out from the depths of my unconscious, I said to myself: this sense of inadequacy is experienced by many people. It is not related to my history, it is something greater. Everyone who listened to it was struck by the piece, and I went from keeping this piece for myself to publishing it … I realized that the potential could be more open and universal. For this reason, in the video, instead of portraying myself in a meaningless ego-trip, also because precisely as we understand in the piece it is not that I have all this self-esteem, I wanted to put a girl as the protagonist and portray that she hated herself. I didn’t want to take back the ten thousand emo / pop / punk clichés that are now in fashion and do something trivial. So I tried to think about how to convey the idea of ​​a person who has this worm in his head and who hates himself every day. Then, inspired by a Carpenter’s film, “They Live”, I got the idea: everything the protagonist reads is an insult to her. The video was written by me and was made together with Khora Visual and the protagonist, Sheila Guarnieri, who was very good at playing the part. Being hard on yourself is a huge burden. Maybe it starts with not feeling comfortable in a certain situation, and leads us to depression, hurting ourselves, anorexia and a lot of other causes. What I can do, in my small way, is to be sincere with words and feelings, without putting on masks or giving more than what is needed.

I am a producer as a job, so I am very critical as a profession. If I let something out it is because I feel that you deserve to go out, and because maybe it could be useful to someone. In retrospect, Radiohead also did their most famous song, “Creep”, which is exactly about that. I wasn’t inspired by them, but I hooked up later. I could say this is my personal “Creep”, even though Thom Yorke is a sacred monster and I’m not missing his rusty guitar string.