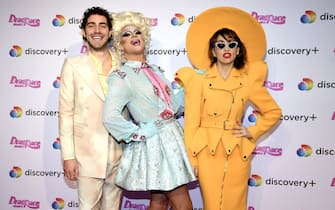 After the success of the first edition, Drag Race Italy back on Discovery + with the new episodes airing starting from October 20, one a week, every Thursday. Hosts, Priscilla (alias Mariano Gallo), presenter and member of the fixed jury together with Chiara Francini and Tommaso Zorzi

WATCH THE VIDEO: Drag Race, 10 curiosities about the program

The second edition of the talent show with drag queens as protagonists, ready to battle each other with rehearsals and performances, will again see Priscilla at the center of the scene. The best known Italian drag, well known also abroad, is more than enthusiastic about the welcome reserved by the local public

Chiara Francini is also very happy to return to take on the sumptuous role of juror of the show. In the first episode, special guest of the jury, Patty Pravo

Chiara Francini: the most beautiful photos of the actress

Tommaso Zorzi is the third member of the fixed jury of the second edition of the show. Also this year he promises to animate every episode with his irreverent judgments

Who is Tommaso Zorzi

The alchemy and composition of the three jurors, already much loved individually by the television and social media, allowed the success of the first edition of the program, immediately reconfirmed for a second cycle of episodes. The show is broadcast in the clear, after the first broadcast in streaming, on Real Time

The artistic cast of the second season of Drag Race Italy involves the participation of ten challengers. Among these, Gioffrè: twenty-five years old, Italian, of Calabrian origins, she gained experience in New York. Her strength is creativity as she deals with fashion and stage costumes

Narciso, twenty-nine, comes from the province of Frosinone. He will make use of his singing and musical skills to make himself loved by the public. Defines his style of retro glam

Diamond studied fashion and comes from a family of artists. After dealing with the costumes of other drag, she began her career, now ten years. She defines herself as a unique artist

Twenty-nine years old, Panthera Virus, defines herself as the Ciociara dragons of the group. Her look is goth and fetish but the inspirations of her aesthetic also come from the vintage burlesque world. For her to be a Drag Race is a dream

Obama Queen was born and raised in Rome, of Italian-Senegalese origins, and in 2018 she participated in the Big Brother. Thirty-three, she loves fashion and couture looks. In the capital you perform at the Muccassassina

Nehellenia, thirty-one, comes from Rome. It defines his colorful, eclectic and refined style. Points of reference, the world of cartoons and that of the pop stars of the late nineties, beginning of the 2000s

For Skandalove Drag Race 2 it will be a path of rebirth and rediscovery of herself. Her performances, she promises, will also be fun. In life she works as a make-up artist and hairdresser

Palermitana, thirty-two years old, La Petite Noire defines herself as versatile. She loves drag because she allows her to be anything. Her strong point is the dance

The inspiration for Aura Eternal, a 24-year-old from Palermo, is the world of stars from Cher to Ornella Vanoni and all the great pop stars of the nineties. Strengths, dancing and singing

Tanissa Yoncè, twenty-eight, from Palermo, defines herself as very bad and strong. Her aesthetics are her strong point, she shows off with very rich clothes, which she makes herself, and she never does without jewels