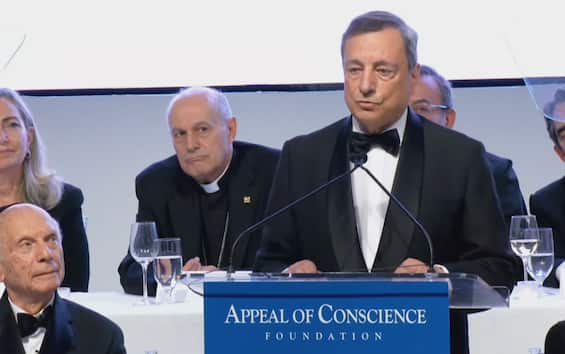 Dialogue but no ambiguity. Because autocracies “thrive” in the face of “hesitation”. This is the recipe that Mario Draghi explains in New York, to the audience of the 57th edition of the Annual Awards Dinner of the “Appeal of Conscience Foundation”, the foundation that awarded him the World Statesman award (“Statesman of the Year”), which first from him they received various heads of state and government, from Gorbachev to Angela Merkel up to Shinzo Abe, just last year, which Draghi recalls at the opening of his speech.

Compliments from Biden and Kissinger

Joe Biden, in a message to the foundation, thanked the premier for his “leadership” and for the “powerful voice” he had in the promotion of human rights. And even more flattering are the words of Henry Kissinger’s laudatio: “His courage and vision of him will ensure that he will stay with us for a long time,” says the former US secretary of state as Draghi makes the gesture with his hand. to brake.

Faced with the risk of a new Cold War, of a new “polarization” triggered by Russia’s war against Ukraine, the premier says, it will be the way we “deal with autocracies” that “will define our ability to shape the future. “.” Therefore, he summarizes, “frankness, coherence and commitment” are needed. In the meantime, we need to be “clear and explicit about the founding values ​​of our societies”, faith in democracy and “the rule of law”, respect for human rights, global solidarity. Ideals that should “guide our foreign policy in a clear and predictable way”. If you draw a “red line”, the metaphor, you have to “respect it.” “we must honor him.” Also not to “regret it later”.

The words about Russia and Ukraine

In short, we must be ready to “collaborate” also with authoritarian governments but without “compromising our fundamental values”. This applies first of all to the Ukrainian crisis: the EU, the US and the whole West have shown themselves to be “firm and united” in their support for Kiev, whose “heroism” is “a powerful reminder of what we are fighting for, of what we are about to do. lose”. Despite the “sadness” of these times, Draghi nevertheless professes to be optimistic: that Russia can “return to the rules that she signed in 1945” and that Ukraine can find that “peace” that we must not stop looking for. “Only global cooperation – concluded the premier who will reiterate the concept tonight in his speech at the UN general assembly – can help solve global problems, from pandemics to climate change”.