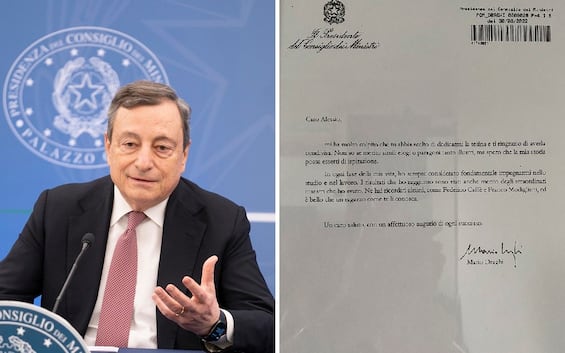 “Yesterday morning, at the seaside, I received the answer to the sending of my essay by the President of the Council of Ministers Mario Draghi. My essay talked about his life. Thanks for the answer … Now I’m very happy”. To write it on Twitter is a student named Alessio, posting immediately below the photo of a letter whose sender is Prime Minister Draghi (this is not the first time this happens, ed). The student had sent the essay to the Prime Minister, but he certainly did not expect to receive an answer either. Which, on the other hand, arrived on time. “Dear Alessio”, reads the text of the letter signed by Draghi, “I was very impressed that you chose to dedicate the essay to me and I thank you for sharing it. I don’t know if I deserve such illustrious praise or comparisons, but I hope that my story may inspire you. “

“In every phase of my life” – continues the premier – “I have always considered it essential to commit myself to study and work. The results I have achieved were also thanks to the extraordinary teachers I have had. You have remembered some of them, such as Federico Caffè and Franco Modigliani, and it’s nice that a boy like you knows them “. Words that left Alessio stunned. It is not every day that you receive a letter on the heading of which stands the words “Presidency of the Council of Ministers” and discover that the premier in office has read his own writing. In a short time, the post has collected and collected hundreds of likes and retweets, with the boy who has made it known that he has already taken steps to frame the message.