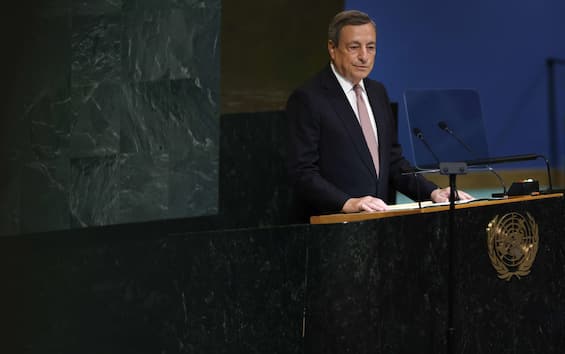 Mario Draghi’s mission in New York is over, where he participated in the 77th general assembly of the United Nations. Before leaving for Rome, the Italian premier met the UN secretary general Antonio Guterres for a bilateral meeting. “You are a true champion of multilateralism,” Guterres told Draghi. “The only possible answer is to join our efforts at the United Nations”, reiterated the Prime Minister.

The meeting between Draghi and Guterres

“We are extremely grateful for your leadership at the international level, for the ability you have had together with Italy to carry out and unblock very important dossiers. You have made an exceptional contribution. You are a true champion of multilateralism ”. According to sources present at the meeting, these are the words addressed by Guterres to Draghi during the bilateral meeting at the UN. “This is a time when the only possible answer is to join our efforts at the United Nations. It struck me how in these days, during the General Assembly, many speeches we have mentioned the United Nations Charter. Signing it was one of the best things humanity has ever done. This institution should always have a leading role ”, was the response of the Italian premier. Draghi, according to the sources, then added: “I am extremely grateful for what you personally and all the United Nations have done to unblock the grain from the Black Sea ports and for what you are doing in Libya”. During the interview, Guterres underlined: “We try to use all possible margins to make ourselves useful. In the case of the unblocking of grain in the Black Sea ports, the United Nations system has worked and is working very well together. “The premier finally reiterated Italy’s willingness:” Let me know what we can do to further promote the cause of United Nations in Europe. We’re at your service”.

Ukraine, Draghi’s farewell to Olena Zelenska. Usa: “Regardless of the vote, Italy will not parade”

After the bilateral meeting with Guterres, Draghi left the UN Headquarters and attended the reception at the Natural Science Museum in Central Park offered by US President Joe Biden to the leaders present at the UN. During his last speech in plenary, the Italian premier reiterated Italy’s support for Ukraine, also confirmed during a brief greeting to the Ukrainian first lady Olena Zelenska. Zelenska thanked Draghi for his support and for the words she uttered in her speech, Draghi confirmed to Volodymyr Zelensky’s wife the proximity of Rome to Kiev. On Ukraine, a senior White House executive said: “We do not believe that, regardless of the outcome of the vote, Italy will somehow pull out of the Western coalition of countries that support Ukraine.” on the sidelines of the UN assembly, he added: “We believe that not even our key partners in Europe think so, even if this does not mean that it will be exactly the same as with Draghi. But we think that this ‘end of the world’ narrative on the Italian elections does not correspond with our expectations of what will happen “. The same executive then underlined: “Whoever becomes the new prime minister in Italy, the American president will have to speak to us immediately and take the measures of that person and determine what this will mean”.