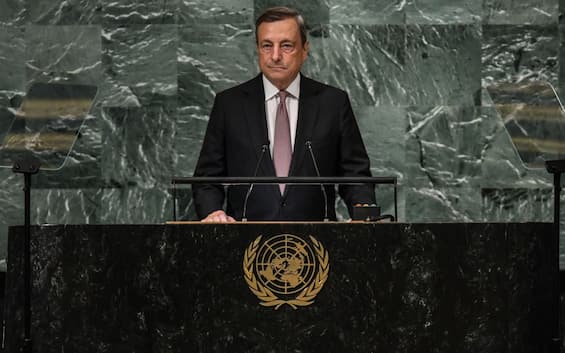 “Helping Ukraine to protect itself was not only the correct choice to make. It was the only choice consistent with the ideals of justice and brotherhood that are the basis of the United Nations Charter.” Mario Draghi speaks for the second and last time before the United Nations General Assembly. He does so while the world awaits Vladimir Putin’s speech, and appeals to the international community “not to divide itself between North and South”, to remain united in the face of the provocations of the “Tsar”, because, he says, “everyone’s future is at stake”.

The response to the invasion of Ukraine

The invasion of Ukraine, the premier reiterated from the stage of the UN Headquarters, “violates the values ​​and rules on which international security and civil coexistence between countries has been based for decades. We were convinced that we no longer had to witness wars of aggression in Europe. Since February we have instead witnessed the attempt to subjugate a free and sovereign democracy, which reacted with pride and courage to defend its independence, its dignity “. “Italy – said Draghi – has acted without delay, together with the other member countries of the European Union, with the allies of NATO and the G7, with all the partners who, like us, believe in an international system based on rules and multilateralism “. “Together – underlined the premier – we have responded to the requests of President Zelensky, because a military invasion planned for months and on several fronts does not stop only with words”.

“The sanctions we have imposed on Moscow have had a disruptive effect on the Russian war machine, on its economy”: said Draghi, indirectly responding to those who question the effectiveness of the measure against Moscow. “The unity of the European Union and its allies – he reiterated – was decisive in offering Ukraine the support it needed, to impose very hard costs on Russia. Moscow immediately tried to divide our countries, to use gas as a weapon of blackmail. Now we have to do more, especially at the European level. As Italy has long argued, the European Union must impose a ceiling on the price of gas imports, also to further reduce the funding we send to Russia. Europe must support the member states while they support Kiev ”.

“So far, Russia has not shown that it wants an end to the conflict: the referendums for independence in the Donbass are a further violation of international law that we strongly condemn”: said Prime Minister Draghi in his speech at the general assembly of the The UN commented on Moscow’s decision to hold a referendum for the annexation of Donbass in Ukraine in the coming days. Draghi then cites Michail Gorbachev and his words on cooperation pronounced at the UNGA in 1988, hoping “there may be a future in which Russia will return to respect the principles it chose to subscribe in 1945. A world divided into blocks, crossed by rigid Ideological demarcations and military contrasts do not generate development, they do not solve problems “.

“In recent weeks – the Italian premier stressed – a heroic counter-offensive has allowed Ukraine to recover thousands of square kilometers of territory starting from Kharkiv, and forced the Russian army to retreat. The outcome of the conflict still remains. unpredictable, but Kiev seems to have acquired an important strategic advantage “. “Moscow’s plan was to conquer Kiev in a few weeks. The Ukrainian soldiers thwarted this strategy and forced Russia into a longer and more exhausting conflict, thanks also to our military assistance”. “Italy remains at the forefront to try to reach an agreement, when it is possible” to end the war in Ukraine. “We have done this in the past, when we highlighted how blocking the Black Sea ports posed a risk to global food security. The Ukrainian wheat export agreement was an important moment of collaboration between the parties, so I want thank the UN, Secretary General Guterres, Turkey “.