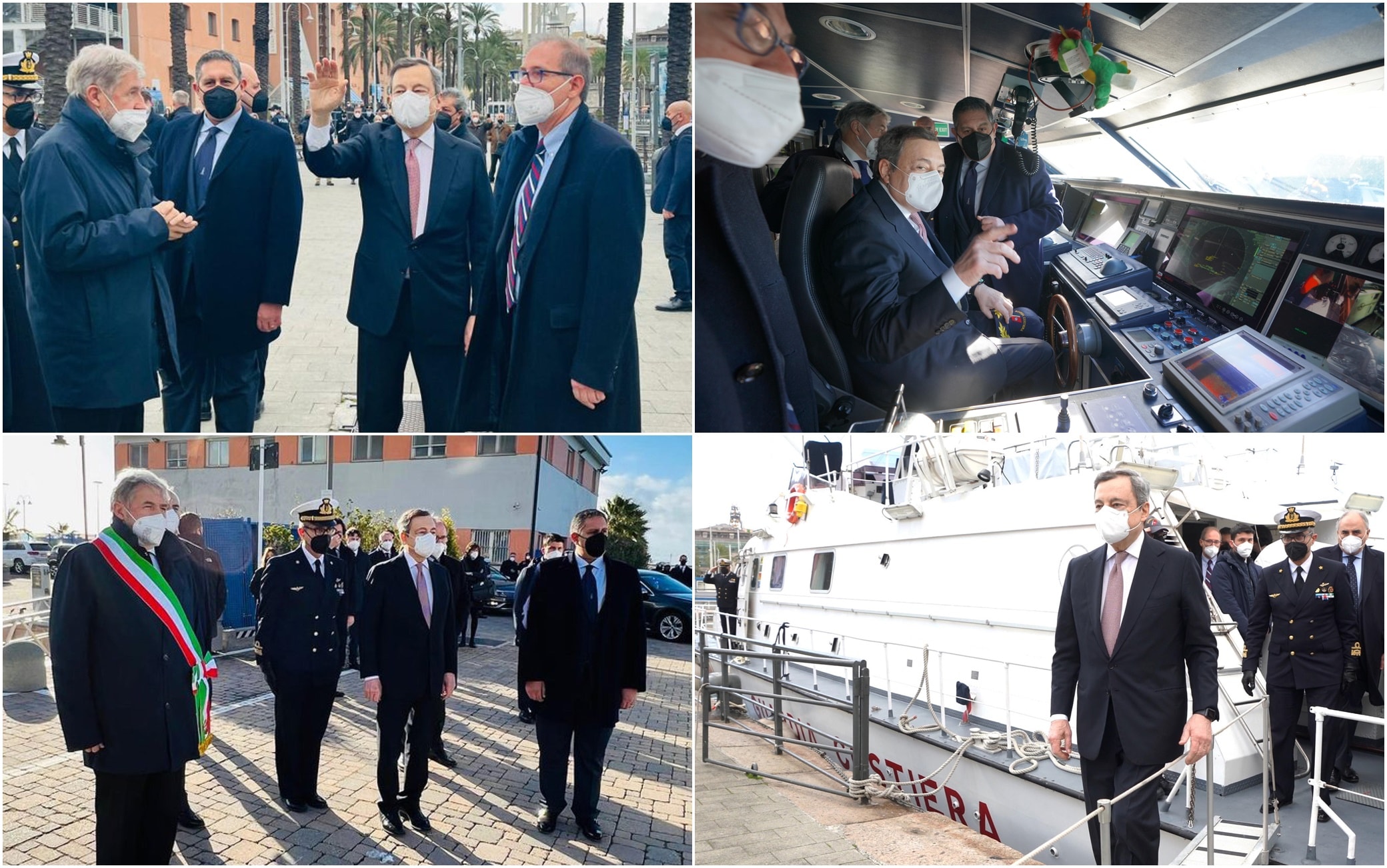 The premier is in the Ligurian capital. The first stop will be the port, then he will move to the Clearing of Memory, where he will meet the families of the victims of the collapse of Ponte Morandi. Finally it will be at the base camp of the Terzo Valico construction sites in Trasta

Genoa has “become a model of how to leave after a tragedy”: these are the words of Mario Draghi, who is visiting the city today. Three stages for the Prime Minister. The premier landed at the airport of the Ligurian capital at 9.40, then reached the Porto Antico with the Coast Guard patrol boat CP288. After this first stage he moved to the Clearing of Memory to meet the families of the victims of the collapse of the Morandi Bridge. Then a visit to the base camp of the Terzo Valico construction sites in Trasta.

“The recent history of Genoa – and the courage of the Genoese – show us above all how to restart after a tragedy – said Draghi during his speech at Palazzo San Giorgio after his visit to the Port -. I think about what happened after the collapse of the Morandi Bridge. I want to express once again the closeness of the government and my personal closeness to the families of the 43 victims, to the injured, to their loved ones. Today, like four years ago, their pain is our pain. And I want to thank the commissioner, the local authorities, Senator Renzo Piano and all those involved in the reconstruction. An example of collaboration, speed, concreteness that has become a model. “Then the premier thanked for” this warmth you have shown me and for the splendid words spoken by those who preceded me. “” It is a great pleasure to be here today. I had come to Genoa many times, but they were quick visits. Today’s visit introduced me to a city I did not know “, he stressed.

“My hope – said the premier – is that the same spirit of rebirth that we see today in Genoa will continue to pervade all of Italy in the crucial years ahead”. “Growing the port area of ​​Genoa – he continued – means betting on the potential of this city. On the ability of our country to be a protagonist in the Mediterranean and in the world. It means creating jobs and new opportunities for young people. And demonstrating that interventions of this magnitude can be carried out respecting the environment and go hand in hand with the improvement of services for citizens. For a city that is even more liveable and ever closer to the sea. ‘Genoa always new, life that finds itself’ , wrote the poet Giorgio Caproni in his famous tribute to the city “.

In his speech, Draghi also spoke of the PNRR. “The speed and efficiency of the port port are fundamental for our exports and for the entire production sector. Today the National Recovery and Resilience Plan, together with the Extraordinary Program, allow us to make the Port of Genoa even more competitive and sure, “he said. And again: “It is an investment in the city and in the regional and national industry”. The PNRR, he added, “belongs to all Italians. We must carry it forward with unity, trust, determination. Last year we achieved all the objectives. The same will happen again this year. It is a question of seriousness – towards citizens and our European partners. And it’s a question of reliability – because sustained, equitable, sustainable growth is the best custodian of stability. ” A passage also on the issue of bills: “The government is preparing a far-reaching intervention in the coming days” against expensive energy.

The stages of Draghi in Genoa

Draghi then visited the Port of Genoa in the morning. A dozen people who witnessed the “landing” from the pilot boat of the Genoese Coast Guard in the ancient port applauded the premier. Only one shouted “shame”, but was overwhelmed by applause. Accompanied by the prefect Renato Franceschelli, the Ligurian governor Giovanni Toti, the mayor of Genoa Marco Bucci and the civil and military authorities, the president arrived at Palazzo San Giorgio, seat of the Port Authority of Genoa. At 11.30, then, the visit to the Clearing of Memory, with a moment of prayer officiated by the Archbishop of Genoa, Mons. Marco Tasca. Finally, at 12.10, a visit to the construction site of the Third Railway Pass (Genoa Trasta base camp).

Toti: “Your visit fills us with pride”

To welcome Draghi was therefore the governor Toti. “Welcome to Liguria. His visit fills us with pride. It is a beautiful and important day for this city and for all of Liguria, a strong signal of attention for this territory which today, after two very difficult years, is ready to face future challenges with determination to support growth and development “, said the Ligurian president welcoming the premier. Later, a long applause greeted Draghi as he entered the monumental “Sala delle Compere” of Palazzo San Giorgio. “A historic occasion”, said the mayor Marco Bucci, taking the floor for the institutional greeting.