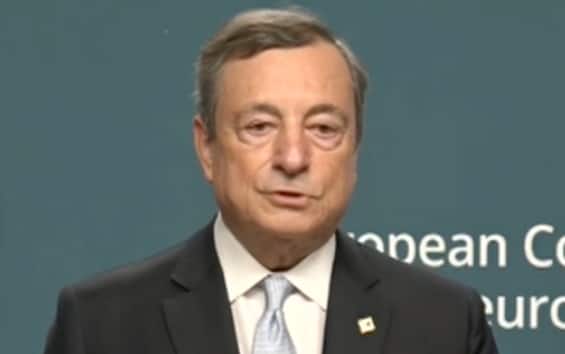 “This is my last press conference in Brussels, and my last as President of the Council”: this is how he opened his final speech by Prime Minister Mario Draghi at the end of the European Council, before his return to Italy for the handover with the new government. The former president of the ECB spoke of the country’s future role in the international forum: “The EU is fundamental, Italy must be at the center of the European project with the credibility, authority and determination that befits a great Country like ours “. Draghi then underlined how the energy package decided by the Council “accepts all of Italy’s proposals”, and this decision “will soon translate into lower bills”.

“Reduced impact of price increases on poor families by 90%”

In his speech at the end of the EU summit with the theme of energy at the center, Draghi claimed that “the effects” of government action “above all in terms of equity were significant” and “we have halved the effect of price increases. on family budgets. In the case of the poorest families, the impact of inflation has been reduced by 90% “.

“We have always said that the response to the crisis must be European, we must preserve the unity of our countries, which is essential to impose maximum pressure on Russia”, said Draghi. “We must preserve the single market, prevent the risk of financial instability. A strong European response is essential for Italy and also for Europe”, added the premier, recalling how the Council conclusions “show that the EU is united. The package welcomes all the proposals from Italy “. “Today’s result shows that Europe is more united. None of us before this meeting, especially after the Prague Summit, could have imagined that we would arrive at such a unified decision on what is today the most important problem of the EU. “said Draghi again.

“EU gas measures are those of our government”

“There is one aspect that makes me particularly proud”, remarked Draghi. “All these measures are initiatives of the Italian government, I want to thank Minister Cingolani and Undersecretary Amendola and all the diplomats who worked” on the dossier. “It is the demonstration that Italy can trace a path” in Europe. “We expect that” in the coming weeks “the energy ministers and also Ecofin will reach an operational decision” on energy and “the financing of the common fund. This is the hope that the whole European Council has expressed”.

“Lower bills soon with the agreement in the EU”

“Tonight’s decision led to a drop in the price of gas, after the agreement the prices lost 10%, demonstrating that the speculative component is relevant”, the outgoing premier said again. “This is the world where the crisis had to be addressed from the beginning and it will soon translate into lower bills.” “The proposals so far asked countries with gas availability to share this availability. And it is a dimension of solidarity, there was no element of solidarity on prices. Our problem is not the availability of gas, we are the ones in the EU with the greater availability. Our problem is the price and on this front there were no proposals “.

“Nice conversation with Scholz, we found an agreement”

During the European Council there was also a bilateral meeting between the outgoing premier and the German chancellor, Olaf Scholz: “We retraced yesterday’s discussion. I gave credit to him for having understood the Italian position and to have finally supported it and he gave credit to me for having defended and explained it well: it was a beautiful conversation, two people who were on totally opposite points of view and found a convergence “. Draghi then added that “today’s result shows that Europe is more united. At the beginning none of us could have imagined that we would arrive at such a united decision. But sharing the debt is a much longer step ”.

“With China, avoid the mistakes made with Russia”

Space also for international relations: during the press conference Mario Draghi said that with China “we must not repeat Russia’s mistakes. This was said in the Council. The concern is to avoid this danger”.

Finally, space for the changing of the guard in sight at Palazzo Chigi: “I do not give advice to the new government, what an outgoing government can do is leave the testimony of what it has done, this is what an outgoing prime minister leaves to that that is coming ”, Prime Minister Mario Draghi said, answering a question at a press conference at the end of the EU Summit and underlining that” we have tried to leave a smooth transition “so that the new government” can quickly start its business “.