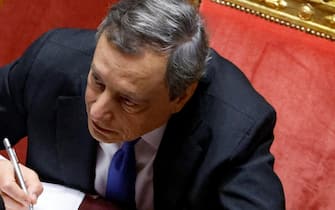 WATCH ALL THE VIDEOS ON THE GOVERNMENT CRISIS

“Sincerely grateful to Mario Draghi for his unwavering support for Ukraine in fighting against Russian aggression and defending common European values, democracy and freedom”, writes the Ukrainian president on Twitter. Volodymyr Zelensky. “We will continue to work to develop cooperation between Ukraine and Italy, I am convinced that Italy’s active support for the Ukrainian people will continue”

The Sky Tg 24 special on the government crisis

“A great Italian statesman”, “a reliable partner”, “a friend of France”. Thus the President of the French Republic Emmanuel Macron, in an official statement, he paid tribute to Draghi and his “relentless commitment to reform his country”. According to the head of the Elysée, the work carried out by Draghi “represents a very solid basis, on which Italy will be able to rely in the coming months and years”

ALL THE UPDATES ON THE GOVERNMENT CRISIS

“There Russia it will not support any party in the elections in Italy, as the US and EU countries do, declaring itself in favor of one or the other political force during consultations in other states “, said the spokeswoman for the Foreign Ministry Maria Zakharova. “For us in Italy it is advantageous to develop cooperation. But who, how and when comes to power in Italy, is the business of the Italians ”

The judgment of theEconomist. “The probable outcome of Mario Draghi’s resignation”, that is early political elections“It could hardly come at a less opportune moment between at least three interconnected crises: the invasion of Ukraine, energy and inflation”

What does it mean to dissolve the Chambers

“Due to the lengthy procedures required to elect and install a new government in Italy, the decision-making process in the third largest economy in the EU will be paralyzed at least until the end of October”, writes the British weekly which defines Draghi as a reformist premier. “This, in turn, will jeopardize the ability of the Parliament to approve the balance for 2023 on schedule ”, arousing concern for Europe as well

Government fall, Draghi resigned: and now what happens? The scenarios

Also French newspapers devote ample space to the government crisis, commenting on what happened on Wednesday 20 July, therefore the lack of confidence vote by Lega, Forza Italia and Movimento 5 Stelle. “The right and the M5S bring down Mario Draghi”, headlines on the front page Le Figaro, a conservative newspaper of France. “Three parties belonging to the Draghi coalition refused to vote for the prime minister yesterday in the Italian Senate, effectively leading to the end of his government of national unity”

“Dragons disheartened from his allies “writes on the front page Les Echosthe Paris business newspaper. Ouest-France speaks of “Europe in apnea”: “The Italian premier – reads one of the most widely read newspapers in France – was discharged last night by three parties of his coalition. The collapse of his government would not wish anything good for the ‘European Union “. And he adds that” in Madrid, Paris and Berlin there are fears of a political crisis that would sink the euro zone and send a message of disunity to Russia ”

The crisis of the Italian government continues to be present also on the front pages of German paper newspapers of today. Frankfurter Allgemeine Zeitung headline: “The loser is Italy”

According to New York Times the Draghi government, which has “restored influence and credibility” to Italy, is leading the country towards a “new season of political chaos“In a” stinging blow for Italy and Europe ”

The Wall Street Journal speaks of a political upheaval that “comes at a crucial moment for Italy, which, like the rest of Europe, is facing rising inflation and other effects of the war in Ukraine”

In its online edition El Pais, he writes: “The Italian Parliament, a wild and self-destructive animal, consummated its latest lethal operation on Wednesday and liquidated the legislature forcing the prime minister, Mario Draghi, to resign. The violent event has many parents. But they were the parties of the rightForza Italia and the Lega, those who dealt the coup de grace to the executive they were part of ”