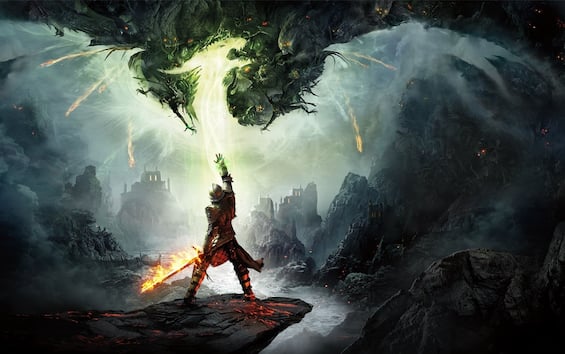 Netflix x (also visible on Sky Q and via the app on Now Smart Stick) loves to adapt successful video games. Forgetting it The Witcher (which was in turn a literary saga before inspiring a series of games), the great work done with the animated show based on Castlevania. This time the platform tries again, collaborating with BioWare itself which created the franchise subject of the new adaptation in the form of anime. Dragon Age: Absolution is ready to hit our screens starting December 9th.

The processing of Dragon Age: Absolution was announced last June and today the show inspired by the famous video game series is almost ready. It will be released on December 9 and will consist of a rather short first season of six episodes, each of which lasts half an hour. To pull the reins of the entire operation, as showrunner, there is that Mairghread Scott already behind Justice League Dark: Apokolips War. Further guaranteeing the quality of the work and fidelity to the original material is the partnership between Netflix and BioWare. The software house that built the universe of Dragon Age in fact, he actively collaborated in the creation of Absolution, helping to invent a new story for the series but not extraneous to the logic of this almost infinite world. The videogame saga then becomes an anime 13 years after its birth, when with Dragon Age Origin in fact, he almost immediately managed to win over a hard core of enthusiasts. Contributing to that exploit was certainly the plot, able to be heavily influenced by the player’s actions and the ability of the team behind the IP to build many different but credible narratives. Waiting for Dragon Age: Dreadwolfwhich should arrive at the end of 2023, fans can meanwhile console themselves with these new events that further expand the epic scope of the story.

Who has played any title of Dragon Age will find here the same atmosphere that permeates the chapters of the famous RPG. It is true that the “anime” aesthetic (which gives a nod to Japanese animation) could displace but it is also true that the series always moves in the wake of that imaginary fantasy made up of warriors and creatures by now familiar to fans. The story of Dragon Age: Absolution takes place in Tevinter and has Miriam as the main protagonist. The heroine is a mercenary who, having escaped from slavery, will be ready to fight to keep her freedom (and beyond). Around her moves a pantheon of characters belonging to different races who have different feelings towards the controversial nation of Tevinter. It was chosen here not to bring back familiar faces to those you met Dragon Age with a joystick in hand, rather preferring to focus on new characters but somehow similar to those already encountered in the video game. We will thus find ourselves during the episodes belonging to each race (including those created specifically for the game, such as the Qunari) without however the feeling of being faced with something already seen. If you can’t wait to find out more, don’t worry. The show will officially arrive on December 9th. Although it would be foolish not to expect more surprises for December 4th which, as all fans know, has officially become the Dragon Age day.