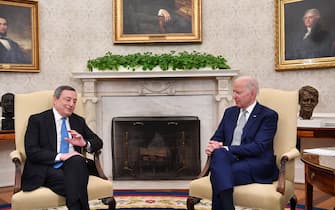 Mario Draghi’s first official trip to the United States since he became Prime Minister opened in the White House, with the face to face with US President Joe Biden

WATCH THE VIDEO: Ukraine, Draghi: use every channel for the ceasefire

On the table of the Oval Office, the war in Ukraine and its consequences, from the food crisis to the Italian race to free itself from the energy dependence that binds it to Moscow. Draghi, according to reports, will ask Biden to increase the supply of liquid gas to Rome. Biden defined cooperation between Italy and the United States as “fundamental”. Instead he said to Draghi: “You have been a good friend and a great ally”

Dragons in the United States: the program

“We have a lot to talk about. Welcome, man,” Biden told his host. The war in Ukraine, underlined the Italian premier, has united Rome and Washington even more. “Putin thought of dividing us, but he failed. We are united in condemning the invasion of Ukraine, united in sanctions and in helping Ukraine as President Zelensky asked us. We must use every channel for peace, for a ceasefire. the fire and the start of credible negotiations “, underlined Draghi

The conflict, said Draghi, “will bring massive changes to Europe”. In Italy, as in the other countries of the Old Continent, “people want an end to these massacres, this violence, this butchery. People think about what we can do to bring peace “

Draghi, reflecting on the impact that the conflict between Russia and Ukraine has brought to Brussels, instead told Biden that “what is happening has brought about a drastic change in the European Union, we were close and now we are even closer and I know that we can count on your support as a sincere friend of the EU and Italy ”

WATCH THE VIDEO: Ukraine, Draghi: ties with the United States are even stronger

White House spokesperson Jen Psaki, responding to a question about the peace efforts relaunched by Draghi, said the United States continues to “be open to a diplomatic solution in Ukraine, but we see no sign from Russia willing to commit. in this path ”

Tomorrow, May 11, Draghi will visit the US Congress, where a bipartisan meeting with parliamentarians and a greeting to the speaker of the House Nancy Pelosi is scheduled

The premier will then hold a meeting with the press at the Italian embassy. Before returning to Italy he will then go to the Atlantic Council, where he will receive the Distinguished Leadership Award

Speaking of the meeting with Draghi, Biden wrote on Twitter earlier in the morning that he can’t wait to “reaffirm the friendship and strong collaboration between our two nations and to discuss our continued support for Ukraine”