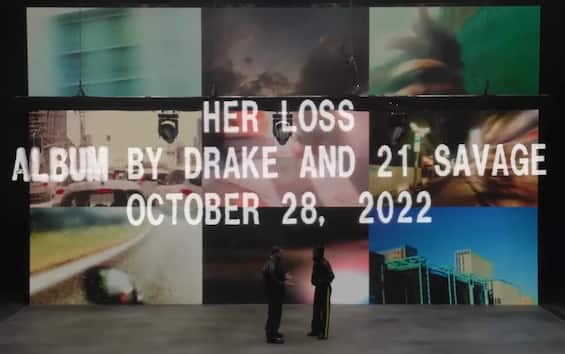 It’s a really busy and prolific time for Canadian rapper Drake: after the records Honestly, Nevermind And Certified Lover Boyhis third album will be released on October 28 in just over a year.

The title of this new recording effort is Her Loss. The album will be released in collaboration with British rapper and producer 21 Savage.

The two artists announced their featuring in a video clip, the music video accompanying the song Jimmy Cooks by Drake feat. 21 Savage. The latter is the song contained in the Canadian rapper’s record titled Honestly, Nevermindwork released four months ago.

This will not be the second collaboration between Drake and 21 Savage: besides having joined forces to produce the song Jimmy Cooksin fact, the two rappers had already worked together on other occasions.
They teamed up in 2021 for Knife Talk (contained in Certified Lover Boy), in 2016 in Sneakin ‘ (single he had anticipated More Life) and in 2020 in Mr. Right Now (taken from Savage Mode II of 21 Savage and Metro Boomin).

At the bottom of this article you can watch the video clip of the song Jimmy Cookswhich contains at minute 1:25 the announcement of the new album by Drake and 21 Savage.

The first joint album between Drake and 21 Savage

Drake and 21 Savage had already joined forces for some songs, but this is the first time the two have collaborated for an entire record.

It will be a joint album, the release of which was announced in a very original way in the video clip of Jimmy Cooksreleased Saturday afternoon (October 22), 21 Savage’s birthday.

At 1:25 minutes of the video, directed by Mahfuz Sultan, the title and release date of the new album composed together come out above the heads of the two rappers.

The song Jimmy Cooks debuted at number 1 on the Billboard Hot 100. For Drake this is the eleventh time in first place while for 21 Savage is the second. “The song would seem an ode to the character of Jimmy Brooks, played by Drake himself in the early 2000s in the series Degrassi: The Next Generation“, Reads the website of Billboard.

Below you can watch the video clip of the song Jimmy Cookswhich contains at minute 1:25 the announcement of the new four-handed record by Drake and 21 Savage.