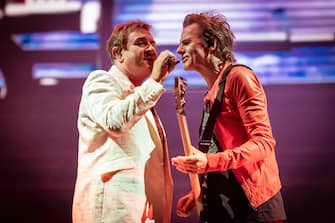 Highly anticipated, they did not disappoint. Welcome back Duran Duran, welcome back to the Eighties. Simon Le Bon, John Taylor, Nick Rhodes and Roger Taylor are the protagonists of the third day of La Prima Estate for their only Italian date. “Wild Boys” opens the concert, unleashing the energy of the audience in raptures

“We want to dedicate the next song, Ordinary world, to the Ukrainian people, affected by the war. Despite everything that is happening, we must never give up hope “said Simon Le Bon, before singing the famous song, about halfway through the concert. The beginning of” Ordinary world “was accompanied by a loud applause.

“Italy loves us, we love Italy” said frontman Simon Le Bon, who spoke to the audience on several occasions during the concert, a real show

Many people already from the early afternoon, waiting for the gates to open. At 17.00 sharp the first races towards the barriers, to earn the best place. Many fans who brought celebratory banners for the iconic band of the Eighties

The last song of almost two hours of show was “Rio”, sung in unison by all present, who did not miss an opportunity to show affection towards this immortal band

In this snapshot, one of the many banners made by Duran Duran fans

Bluvertigo performed before Duran Duran: an expected 21-year reunion, given that the official date of their dissolution dates back to 2001. Morgan, Andy, Sergio Carnevale and Livio Magnini brought twelve songs to the stage, including “Absinthe”, “Sono = Sono”, “Black skies”, “AFDV”, “Zero”

“If Duran Duran hadn’t been there, Bluvertigo wouldn’t have existed too” said Morgan on stage, just before singing “Sono = Sono”, one of the group’s many hits.

Morgan, in splendid shape, sang and jumped with his instruments, also dedicating space to dead times, that is, those moments of pause between one song and another “Dead times are beautiful, aren’t you?” said the artist who, opening the concert, said: “We got together, I would say that we are strong eh” (we confirm it!)

A snapshot of Andy from Bluvertigo

Before Bluvertigo, the English band Easy Life, which in the morning was the protagonist of a talk at Santeria Belmare. Young and fresh, very British-Indie, they played for about an hour (and the applause of those present was heard, and how

In the morning, at Santeria Belmare, the second talk of the week. Marta Cagnola, journalist and Radio24 presenter, was a guest of Michele Boroni to talk about “How music is told: radio and podcasts”

In the morning, the cooking show with Luca Landi