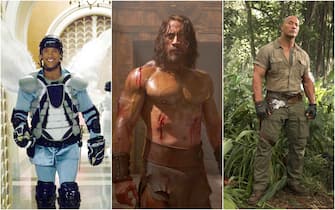 First wrestling champion, then Hollywood star. On May 2, 2022, he turns 50 Dwayne Johnson: was born in 1972 in California. After years in the ring, The Rock arrives in the cinema and in 2002 he gets his first leading role. Since then he has acted in dozens of films, crossing different genres: from action films to comedies, often seasoning everything with a bit of humor and self-irony. He is among the highest paid actors in the world. To celebrate his birthday, here is a selection with 15 of his most famous roles

The Scorpion King (2002). It is Dwayne Johnson’s first starring film, who begins his rise to Hollywood with this role. The film, directed by Chuck Russell, is the spin-off of the genre The Mummy: The Rock had played the same character as Mathayus in The Mummy – The Return. The story is set in 3000 BC, in the biblical city of Gomorrah. It is a costume action film, in which Johnson is an Akkadian warrior who wants to kill King Memnon and avenge the death of his brother.

The treasure of the Amazon (2003). Second film starring in The Rock. Directed by Peter Berg, he plays Beck, a bounty hunter who is sent to Brazil to retrieve Travis (Seann William Scott), the son of his missing boss in the Amazon Rainforest. The two will find themselves fighting a local boss and freeing a tribe of natives from slavery

TikTok, The Rock’s hilarious video at the Wax Museum

Young Rock 2, the series will tell the beginning of Dwayne Johnson’s career

The catcher (2010). Among the films of Dwayne Johnson there is also this film directed by Michael Lembeck. The actor plays an ice hockey player, famous for his tough game, who tells his little fans not to believe in fairy tales and dreams. The Queen of the Fairies (Julie Andrews) decides to punish him, transforming him for two weeks into the male version of the tooth fairy

Fast & Furious (from 2011 to 2019). Among Dwayne Johnson’s leading roles is that of Luke Hobbs in Fast & Furious, the action series based on motor racing: a role that, thanks to the success of the films, gives the actor even more popularity. Johnson appears in the fifth, sixth, seventh (pictured) and eighth chapters. And then in the spin-off, centered on the character of him and that of Deckard Shaw (Jason Statham), Fast & Furious – Hobbs & Shaw

Fast & Furious, no peace between The Rock and Vin Diesel: “He’s a manipulator”

Snitch: The Infiltrator (2013). Inspired by a true story, directed by Ric Roman Waugh, it is a film that straddles various genres: action, drama, thriller. It tells of a businessman (Johnson) who tries to save his son, framed for drug possession and sentenced to 10 years in prison, and is ready for anything. Even to infiltrate a criminal organization. Also in the cast are Jon Bernthal and Susan Sarandon

Pain & Gain – Muscle and Money (2013). This film, directed by Michael Bay and inspired by a true story, tells the story of three bodybuilders: in Miami in the nineties, to make money and conquer the American dream, they begin to engage in criminal activities, such as kidnappings and murders. Also in the cast are Mark Wahlberg and Anthony Mackie

Hercules – The Warrior (2014). Dwayne Johnson plays the Greek demigod, son of Zeus, in this film directed by Brett Ratner: a mix of action, western and comedy, with spectacular battle scenes, in which the actor plays the role of the strong Hercules.

A spy and a half (2016). Dwayne Johnson is also the star, along with Kevin Hart, in this Rawson Marshall Thurber comedy. He plays a beefy CIA agent, as a young bullied at school, involving his old high school friend in an international espionage case.

Baywatch (2017). Dwayne Johnson takes the place of David Hasselhoff in the film adaptation of the famous TV series: he wears the famous red costume and plays Mitch Buchannon, the most famous lifeguard in the world. Together with his team he must investigate a drug dealing on the beaches of Emerald Bay, Florida. In the cast, directed by Seth Gordon, also Zac Efron as Matt Brody and Alexandra Daddario as Summer Quinn

Jumanji – Welcome to the Jungle (2017). Applause from critics and audiences for this film by Jake Kasdan, a sequel – less gloomy and more ironic – to the famous 1995 film starring Robin Williams and Kirsten Dunst. In the new cast, alongside Dwayne Johnson, are Jack Black, Karen Gillan, Nick Jonas and Kevin Hart. Four high school students are catapulted into a mysterious video game: they have assumed the guise of their avatars and will have to survive the dangers of the jungle. In 2019 another chapter was released, Jumanji: The Next Level

A Family Down (2019). Dwayne Johnson returns to wrestling for this Stephen Merchant film and plays himself, The Rock. The film, based on a true story, tells the story of the wrestler Paige (Florence Pugh) and her family of other wrestlers

Jungle Cruise (2021). This film directed by Jaume Collet-Serra is also a success, in which adventure, action and humor intertwine. Dwayne Johnson stars opposite Emily Blunt: he is a riverboat captain who is hired by the scientist to accompany her and her brother in search of the Tree of Life. But the expedition will have to deal with the dangers of the jungle and other people looking for the same thing

Red Notice (2021). This film, directed by Rawson Marshall Thurber, in December 2021 became the most watched ever on Netflix. Stellar Cast: Next to Dwayne Johnson are Gal Gadot and Ryan Reynolds (with a cameo from Ed Sheeran). Johnson is an FBI agent who finds himself teaming up with a famous art thief to capture L’Alfiere, the most wanted art thief in the world.

Oceania (2016). Among the cinematographic works of Dwayne Johnson we cannot fail to mention this Disney animated film directed by Ron Clements and John Musker. Lend your voice to co-star Maui, a stubborn, arrogant and self-centered demigod who has his body covered in animated tattoos