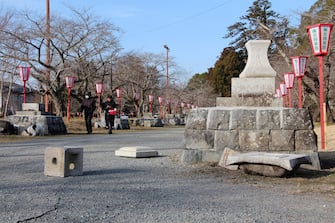 Two people were killed and about 90 injured for the violent earthquake which shook yesterday the Eastern Japan. The two victims can be counted in the counties of Fukushima and Miyagi in the north-east of the country, as reported by the Japanese agency for the management of fires and disasters

According to data from the Disaster Prevention Agency, they have been 7 the prefectures concerned from the earthquake of magnitude 7.4 which hit the Tohoku region late yesterday

In the early hours of Thursday some of the services of the Shinkansen superfast trains were still suspended in the region, after a convoy derailed last night, with 100 people on board, but without causing any accidents

The National Meteorological Agency has the tsunami warning was withdrawn late at night, after observing small wave movements that did not cause damage to coastal structures

The strong earthquake, lasting about two minutes, was felt over much of the Kanto area, the plain of Tokyocausing temporary power outages electricity to around 700,000 homes in the capital

In the photo, the damage in a shop in Sendai

In the photo, damage in a street in Fukushima

In the photo, some people in an evacuation center in the Fukushima area