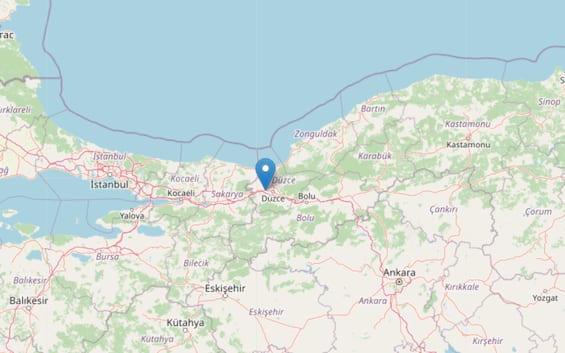 A magnitude 6.1 earthquake was recorded at 4:08 local time (2:08 GMT) in northwestern Turkey. You can read it on the website of the Italian National Institute of Geophysics and Volcanology (Ingv). The earthquake had a hypocenter 10 kilometers deep and an epicenter 15 km from Duzce (about 230 km from Istanbul and 240 from Ankara).

At least 35 people were injured in the quake. The shallow quake struck about 170 kilometers east of Istanbul, the country’s largest city, according to the United States Geological Survey. Interior Minister Suleyman Soylu tweeted that there is no information on the loss of life. In a tweet, Turkish Health Minister Fahrettin Koca specified that “32 injured were registered in the province of Duzce, one in Istanbul, one in Bolu and another in Zonguldak”. No deaths have been reported to date. Some buildings suffered structural damage. The Turkish authorities have declared that the epicenter of the earthquake was the district of Golyaka, in the province of Duzce, but it was also felt in Istanbul. The first images showed people wrapped up in blankets outside their homes during the early morning hours.