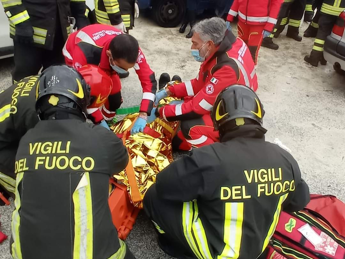 The accident in the cable car and the petrochemical accident with the release of toxic substances, the rescue of a worker trapped on a wind turbine and that of the earthquake victims under the rubble. These are some of the emergency operational scenarios that saw 980 Sicilian firefighters engaged for four days, from 23 to 26 November last. A maxi exercise with simulations from one end of the island to the other coordinated by the Regional Directorate as part of a national plan of activities promoted by the Central Emergency Department of the National Corps in the various Italian regions. In the field the various specializations from the speleo-alpine-fluvial nucleus (Saf) to the Nbcr one, called to intervene when there is a well-founded danger of contamination by nuclear, biological, chemical or radiological substances, and then again the Usar teams, engaged in rescue activities in the rubble after seismic events, explosions or collapses, and the dog-loving nucleus.

“It was an exercise with operational maneuvers in the field and also for command posts – says to the Adnkronos Francesco Fazzari, manager of the public rescue and of the regional mobile column of the Sicilian firefighters -. The nine provincial commands have moved under the coordination of the regional management, which has activated a specific crisis room, in constant connection with the National Operations Center of the Fire Department.

“Our staff is periodically engaged in retraining activities to maintain the specialized skills acquired – he underlines -: it is necessary to stay up to date on the latest techniques and ready to intervene in any condition. However, it is the first time that an exercise of these is carried out. For four days, nine provincial headquarters moved, in addition to the operations rooms to test the procedures with computer systems, with almost a thousand units engaged “. The Red Cross is also involved in the activities: 14 territorial committees, 165 volunteers and 64 vehicles coordinated by the regional operations room.

“There is now a consolidated synergy and collaboration with the firefighters, thanks also to an agreement launched in 2018 which identified the areas of collaboration – explains Luigi Corsaro, regional president of Cri Sicily to Adnkronos -. emergency scenarios our volunteers work side by side with the units of the Corps providing them with technical, logistic, socio-sanitary and psychological support “. A national operational protocol was signed last May between the Italian Red Cross and the National Fire Brigade.

“The four days of exercises saw the massive presence of our volunteers, an exchange of skills to provide a quality response even in complex scenarios – underlines Corsaro -. These simulations, together with those carried out in other regions of Italy, are the first test of a collaboration that will bear fruit at the service of the population in every situation, whether in an emergency or in everyday life “.

In the Trapani area, among the ruins of Poggioreale, the ghost village after the 1968 earthquake that sowed devastation in the Belice valley, the Cri volunteers, together with the staff of the voluntary military corps and volunteer nurses, have also set up an advanced medical post in the field. latest generation base mounted by the fire brigade. Usar teams and the fire brigade canine nucleus simulated the search and rescue of people trapped under the rubble, while the NIS (specialist interventions nucleus) carried out shoring works.

During the exercise, aquatic rescuers, first aid techniques (TPSS) and innovative fire extinguishing systems were also used. Earthquakes and more. In Linguaglossa, on the slopes of Etna and in Ficuzza, in the Palermo area, the firefighters simulated the search for missing people with the use of drones, while the Saf nuclei intervened to rescue some passengers who were stranded on the cable car. At the Priolo Gargallo petrochemical plant in Syracuse, on the other hand, the nuclei specialized in Nbcr scenarios have entered the field.

“We hypothesized the breaking and the leakage of sulfuric acid from a plant in a facility at risk of a major accident – explains Fazzari -. Our staff intervened, equipped with special personal protective clothing and carried out the safety measures. “.

And in the Trapani area, in Santa Ninfa and Alcamo, the Saf of the firefighters climbed to a height of 55 meters, simulating the rescue of a worker trapped on a wind turbine. A base camp was set up in Poggioreale for logistical support activities for operational personnel. “For four days almost a thousand firefighters in every corner of Sicily tested the response capacity of the system, demonstrating once again that they are ready to intervene in any emergency situation”, concludes Fazzari.