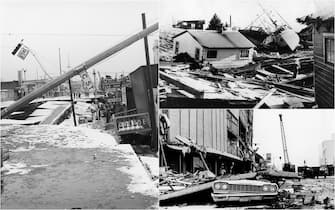 THE earthquakes they are among the most feared natural events by man, given their unpredictability and the possible catastrophic effects they can generate. The current system for calculating the strength of an earthquake is the scale Richter, introduced in the 1930s. But seismographs, even in rudimentary forms, have existed for centuries and it is therefore also possible to roughly estimate the degree of power of past earthquakes. Here are the worst

VALDIVIA EARTHQUAKE – On May 22, 1960 there was the “great earthquake of Chile”, the most powerful to date, with a magnitude of 9.5. It was warned in different parts of the world and caused a tsunami with waves up to 25 meters high that reached the Asian coasts. It also caused the volcanic activity of the Puyehue to resume. The low population density caused a relatively low number of victims, about 3 thousand

Images of the Great Chilean earthquake of 1960

EARTHQUAKE OF ALASKA – On March 27, 1964 (3 am on March 28 for the UTC time zone) Alaska was devastated by an earthquake measuring 9.2 in the Prince William Strait. In Anchorage, buildings collapsed and cracks formed in the streets. A tsunami with waves of 30 meters was also generated. The victims were 143 and the estimated damages were about 2.5 billion dollars

L’Aquila, 13 years ago the earthquake: the city between pain, reconstruction and the future. PHOTO

MAREMOTO INDIAN OCEAN – One of the most catastrophic events of the contemporary era. On December 26, 2004, the tsunami in the Indian Ocean off Sumatra, Indonesia, was classified with magnitudes between 9.1 and 9.3. The waves have devastated the coasts of numerous countries in Asia and Africa: it is estimated that 230,000 people have died, millions displaced. The energy released by the earthquake was one and a half million times higher than the atomic bombs in Japan

EARTHQUAKE IN JAPAN – The 2011 Tōhoku earthquake occurred on March 11, 2011 off the coast of Japan. Its magnitude was 9.0 and caused a very violent tsunami. A wave that arrived near the city of Miyako reached a height of 40 meters. The earthquake is also remembered for causing the disaster at the Fukushima nuclear power plant. The final toll was almost 16 thousand dead

Japan, the Fukushima disaster 11 years ago. The commemorations in the country: PHOTOS

KAMCHATKA EARTHQUAKE – On November 4, 1952, a magnitude 9.0 quake occurred off the coast of the Kamchatka Peninsula, in what was then the Soviet Union. The resulting tsunami also reached Hawaii. It is also known as the “Silent Earthquake”, because Stalin ordered the media to completely hide what happened. Also for this reason it is impossible to quantify the number of deaths, but it is thought that they may have been about 10 thousand

ASSAM EARTHQUAKE – The earthquake in Assam, between India, Tibet and China, which occurred on August 15, 1950, was of magnitude 8.7 (in the photo). Same power (estimated) as that of 1707 BC Hōeiin Japan and the earthquake of Valparaisoin Chile, in July 1730

LISBON EARTHQUAKE – On November 1, 1755, a devastating earthquake destroyed the Portuguese capital. More than half of the city was wiped out. A magnitude between 8.5 and 8.7 is estimated. In Lisbon it is estimated that between 25 and 30% of the population died: the victims were between 60 and 90 thousand (in photos paintings and representations, in addition to the Convento do Carmo, left partially devastated, as it had been reduced by the earthquake)

EARTHQUAKES IN ALASKA, LIMA AND MEXICO – On February 2, 1965 there was the earthquake of the Rat Islands, in Alaska (in the photo, magnitude 8.7). A few years earlier, in 1957, the American state in the far north was also hit by the earthquake of the Andreanof islands (8,6). This same estimated power is attributed to the 1746 Lima earthquakes and 1787 Oaxaca, Mexico.

EARTHQUAKES IN INDONESIA – Indonesia was recently hit by two other very strong earthquakes, both of magnitude 8.6. The first, on March 28, 2005, in Sumatra, killed 915 people in a country already devastated by the catastrophic earthquake of the previous year. The other, on 11 April 2012, always hit Sumatra, in the province of Aceh, fortunately causing only a dozen victims

EARTHQUAKES WITH MORE VICTIMS – The list of earthquakes that instead caused the most deaths sees above all events of the past centuries, so the figures are estimates whose extent can almost never be verified with reliable sources. The worst earthquake of all time on this list is that of Shaanxi, in China, of 23 January 1556 (estimated magnitude 8.0). It is estimated that 820-830 thousand people died. In second place is the earthquake of Haiyuanalso in China, in December 1920: in that case the victims were about 275 thousand

On the other hand, about 245 thousand died in the earthquake of Tangshan on July 28, 1976 when the Hebei province in China was devastated by an earthquake with a magnitude of 7.8 (photo). A similar death toll is estimated for the tremendous earthquake of Antioch 526, in Turkey (at the time it was Byzantine Empire)

In the list, in fifth place, there is a recent earthquake: that ofIndian Ocean of 2004 (in the picture). Between the earthquake and tsunami the victims were 230 thousand. Historically, a similar budget is estimated for the earthquake of Aleppo of 1138, even if the calculation seems to be an addition of the earthquakes of the Giazira plain of 1137 and that of Ganca of 1139

To Aleppo in 533 it is estimated that 130 thousand died. Instead, they were 125 thousand in the 1908 earthquake Messina and Reggio Calabriawith the two cities practically razed to the ground (in the photo the damage to Messina). The victims were about 110 thousand ad Asgabat (Turkmenistan, 1948). Finally, there is the earthquake in the region of Kantō (Japan, 1923) whose estimates speak of 105-142 thousand deaths (40 thousand missing are also included and then given as deceased)